Sportsperson is my debut show. It’s a stand-up hour about, amongst other things, playing sports, my brother having a kid, being non-binary, trying to run a half marathon, being autistic, my first pub crawl, socks, yoga and chocolate bars. It’s directed by the very funny Joz Norris and we’ve had a lot of fun making it. There’s lots of audience interaction and treats and prizes and I think it’s just quite a silly show about my experiences of picking up labels, trying them on and then massively overthinking them.

As a part of the show’s development, you conducted zine making workshops with rugby teams and LGBT+ organisations to explore gender and sports. Tell me about that.

Yes! So, I was very conscious making the show that this would be sharing with audiences my very particular experience of playing sports whilst being non-binary. Sports are often very gendered places and I haven’t always felt comfortable engaging with them for that reason but I joined my rugby team (the Kilburn Cosmos) in 2019 and everyone has been so welcoming and have created a safe space for me to explore my gender through sport. So that’s kind of what the show is about and I wanted to create something for audience members, both as a gift to say thank you for coming but also as a resource for people who maybe aren’t very familiar with the way that sports can be exclusionary towards trans, non-binary and gender non-conforming people.

To make the zine, I co-hosted some workshops with the very talented Hana Ayoob. We had two workshops with LGBT+ organisations and invited trans and non-binary people to make pages that reflected their experiences of sports. Then we did one workshop with my rugby team. People made some really amazing pieces of art and the workshops were (for me at least) both very fun and also quite cathartic. It was nice to meet people with similar experiences and talk through some of the issues we’ve faced in sports.

We took all the pages that people made and turned them into a zine. I’ll have physical copies that feature some of the artwork to give to audience members after my show and then there is also an online version, which has all of the art and an audio description, on my website.

In your opinion, are things getting better for LGBT+ sports players and fans in the UK?

I think that’s a tricky question because the answer is in some ways yes and in some ways no. There’s definitely been some improvements. In Tokyo we saw out trans and non-binary Olympians for the first time which was super cool, and it’s clear that some organisations are making a concerted effort to make LGBTQQIA+ folk feel more welcome. My partner and I are season ticket holders to Harlequins and they feel really committed to making an inclusive environment. At a grassroots level, I know lots of clubs that are LGBT+ or trans led and so that’s great.

But, also, sports are becoming a more toxic space for trans, non-binary and intersex athletes. At highly competitive levels, people are having their lives ripped apart, often because they don’t conform to the correct gender stereotypes. We seem to have decided as a society that we get to discuss other people’s bodies or that we know them better than they do. Organised sports are being used as tool to enforce very strict gender norms and police who gets to be a woman and that spills out into non-sporting environments. Then, at a grassroots level, people are made to feel unwelcome even in spaces labelled as LGBT+ inclusive. Recently, in London, a player was asked to leave a football league that claimed to be open to women and non-binary players, purely based on appearance. It was heartening to see how many teams boycotted the league and the direct action that ensued but I think a lot of people get put off joining in the first place because stuff like this happens and I don’t really blame them.

Tell me about The Revolution Begins at Home and The Coming Out Tapes podcasts.

Well, The Coming Out Tapes was my first podcasting project. It’s an audio archive of coming out stories and kind of an excuse for me to meet people and chat to them about their experiences and dispel some myths. I started it after I did some training for an LGBT+ organization that went into schools that was very focused around the coming out narrative. They coached us into telling our stories in a very clear, linear “and then I came out and then I was fine” kind of a way and I wanted to inject some nuance into that conversation.

The Revolution Begins at Home was a more recent project that I recorded between some of the lockdowns (maybe between lockdown 2 and 3, I’ve lost track). It was funded by Content is Queen and hosted by the amazing Chantelle Lewis (who cohosts Surviving Society, a great sociology podcast). The point of it was to explore activism that is maybe diminished or downplayed or not even considered “real” activism because of its association with women’s work. We recorded some great interviews and I was really proud of it. I’m hoping that, eventually, I’ll get to make another series because we barely scratched the service.

What is your favourite species of bat?

A great question. Very hard to answer though, given there are so many different bat species. I have two bat tattoos, one of a Giant Golden-Crowned Flying Fox and one of a Bumble Bee Bat so I feel like I should pick one of those but, on this occasion, I’m going to choose the Pallid Bat because it has the audacity to pick fights with, and eat, scorpions. 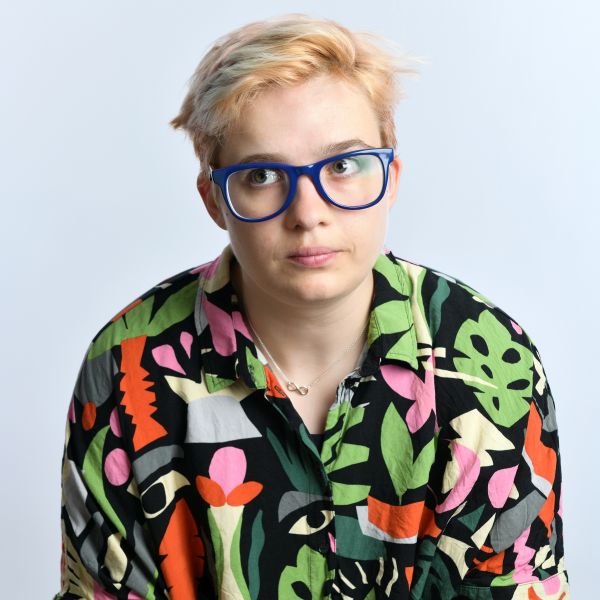