It’s about a disgraced, unemployable actor (no, of course it’s not autobiographical) who takes it upon himself to perform every single genre of theatre in order to save the performing arts from inevitable extinction.

My first gig was at Marcel Lucont’s Cabaret Fantastique in Berlin and I had no idea if I was going to be funny or not. Thankfully I was. Unless they were just being supportive.

I thoroughly wipe my arse (this will make sense when you see my show).

My best review quote was from the Herald Sun in Melbourne which said “He has a butt you could send to rehab and it still wouldn’t quit”. My worst was from a Sydney blog for my first play out of drama school in which I played a gay hairdresser and they said, “Warren-Smith’s 80’s fag performance is all pout and no punch.”

No. But that doesn’t mean I won’t.

I’m very fond of the ones who write nice things about me. Seriously though, I think they’re great but I find the whole star rating system whack.

I’m not really up to scratch with my criminal law but it definitely sounds like the guy is a bit of a douche. Personally I would rather see the people who over breed brachycephalic dogs such as pugs sent to prison. Although I do find them hilarious (the dogs not the breeders).

No. It’s all about the way it’s handled. As long as you’re using these touchy subjects to highlight people’s ignorances then I’m down with it. Punch up.

Making fun of Princess Di went down much better in Australia than it did in the UK. Though maybe if I’d pushed it a bit further it would have become funny again. I shall try.

I’m relatively new to comedy so my best gig was fairly recent. I have a bit where I choose an audience member to play Juliet in a scene from Romeo and Juliet and the woman I chose was called Juliet. I made her get her license out and everything. The whole room lost their shit for about ten minutes. 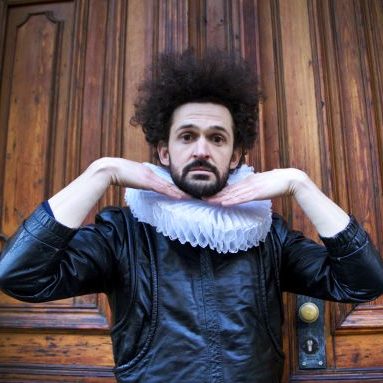