Best known as one half of Peacock & Gamble, Ed Gamble is a stand-up comedian, writer and actor. Although according to his website, he very rarely acts and writing is a very lofty term for the absolute filth he has committed to paper. Martin Walker asks Ed about his 2014 Edinburgh solo Fringe debut, Gambletron 5000.

“As it’s my first show it collects a lot of my best jokes I’ve ever written. Well, all of them in fact. It would be weird if I just left some out for the sake of it. It loosely chronicles how much I have changed as a person over the last couple of years and my struggle to create a completely new personality for myself. There’s a part where I talk about yoghurt and I mime being sick for a while. It’s truly excellent.”

You’ve toured a lot with the fabulous Greg Davies. Any gossip?

“Loads. For instance, did you know he isn’t that tall? What you actually see is his body armour/vehicle, and the real Greg Davies is a little worm like creature that lives in his stomach. It’s a bit like Krang in Teenage Mutant Ninja Turtles. Also, he travels to gigs by floating down a river on his back and I sit on his chest like Baloo and Mowgli in the Jungle Book.”

You’ve also done a bit of TV work. Do you prefer TV or performing to live audiences?

“I don’t think I’ve done enough TV to be able to make a proper comparison – I still find the notion of things like panel shows terrifying. I’ve done a little bit of acting on TV and that’s an opportunity I relish and it feels like something that’s completely different and something I’d really like to explore and get good at. For now, though, live comedy is still the thing I enjoy most and the thing I’m desperate to get better at. I like the instant nature of stand up and you can really feel a routine improving gig to gig through that immediate audience reaction. But if I ever get the chance to host a reboot of Rainbow I would happily sack all that stand up rubbish off.”

“None. I’d just go ‘wooooooooo I am you from the future and robots have taken over.’ 17 year old me would get it. I was a dick then and I’m a dick now.”

“Ray Peacock for sure. He’s the funniest person I know – hence me forcing him into a double act so I could bathe in his reflected glory – and should be on television all the time. He should have his own channel. Nish Kumar would be involved, either doing his excellent stand up or as part of his awesome double act the Gentlemen of Leisure with Tom Neenan.

“I’d probably fly in a couple of Americans like Bill Burr and Morgan Murphy and then top it all off with Jeff Innocent because he makes me scream laughing no matter what. All in all, that makes for a pretty weird show.” 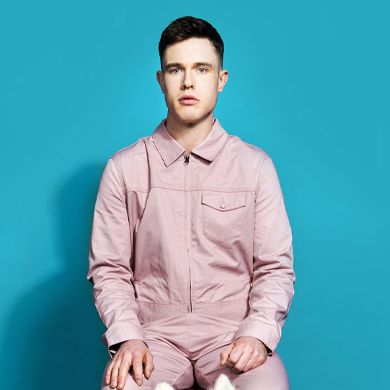