*not even* Remotely Funny

Set in a grimy student flatshare where the dishes are never done and the TV is never turned off, *not even* Remotely Funny blurs the lines between television and reality.

As tensions rise in our messy student house, relationships begin to break down, secrets start to out, all whilst our characters question the identity of a mysterious uninvited house guest. By the close of the curtain, our students struggle to keep hold of what’s real and what’s fake…and the remote.
A split-stage, multi-rolling extravaganza invites audiences to critique the shows we know and love whilst the company pushes the boundaries of a traditional sketch revue, set on a split stage with actors seamlessly demonstrating a new form of sketch for the future.

*not even* Remotely Funny is brought to you by writers, Chris Curran and Noah Matthews, University of Manchester alumni and Manchester Revue founding members.
Following their sell-out show with the Manchester Revue in August 2021, Free Shot on Entry, Curran and Matthews are back with even more energetic zest and “all the youthful zing you could hope for” (Chortle, August 2021) to begin the Fringe’s 75th anniversary year with a bang.

As a company, we are lucky enough to be returning to Edinburgh after a sold-out run last year with our university sketch comedy society, The Manchester Revue. For the three of us that were lucky enough to go to Edinburgh last year, it was undoubtedly the best summer we’ve ever shared. There’s something just so tangible about the Fringe and the people it houses – that collective energy we all seem to be drunk on during the festival! The city and its people are beautiful, warm and accommodating (though we could do without the steep hills occasionally…) and the city is the heart of why Off Script was born.

I find that this is always a tricky question to ask a sketch group, and not just because you’ll get talked at for an hour, but because we each have such different influences and inspirations! In this instance, there are so many film greats that we take inspo from in the show; from Booksmart to the likes of Stepbrothers. Everyday occurrences are definitely Off Script’s biggest motivator, we’re always seeing things and saying, “there’s a sketch in that!”

Absolutely! I’ve already started compiling a personal spreadsheet! But most importantly, most of our cast are University of Manchester alumni and we have lots of talented Manchester friends bringing their own shows up. The Manchester Revue deserve a special shout out for their show, This is a sketch show, and fellow uni alumni So La Flair with their earth-shattering piece, How to keep up with the Kardashians.

What are we looking forward to most at the 2022 Fringe?
-We’re greatly anticipating a more electric year than ever in 2022, as two years worth of covid-repressed artists burst onto the scene for the 75th anniversary. I think the conversations and connections we’ll all make as artists will be more important now than ever. 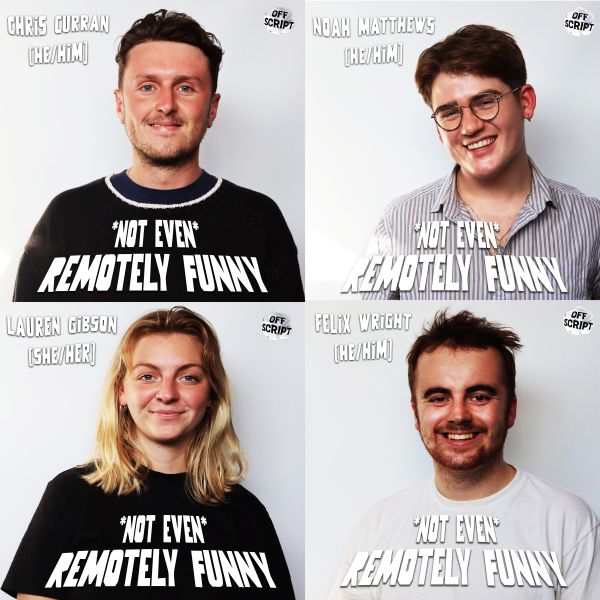