Giacinto Palmieri loves Richard Wagner’s Ring of the Nibelung so much that he shared the plot with all his (now) ex-girlfriends. Now he wants to do the same with his Edinburgh Festival Fringe audience.

“The Ride of the Wagnerian is a comedy show about Richard Wagner’s Ring of the Nibelung cycle of opera, my passion for it and whatever I can relate to it from the point of view of my personal experience and of our shared experience of modern life. I’ll bring Wagner down to us or maybe us up to him, I’m still not sure.”

Have you always preferred classical music to pop?

“I hate these kind of divisions. There is as much richness and complexity in Bjork or Radiohead as in any late Romantic composers, and as much lightness in Vivaldi as in any pop singer. People who restrict their music experience to only one type of music are missing out on precious opportunities.”

Do you think that the subject matter might put some people off?

“Yes, I joke that my target audience is called Stephen Fry. But I think you have to talk about what you can’t help talking about and if you manage to make it personal enough you’ll find people who can connect to to it, since at the end we all share more than we sometimes expect. If, instead, you plan for popular success you’ll become bland and you’ll sound fake. I must also say that early ticket sales are encouraging: I seem to have found a niche.”

What’s the worst thing that’s ever happened to you on stage?

“Once in Essex I was heckled by a guy mimicking the sound of snoring. He was probably right, my performance that night was actually boring, and I didn’t know how to answer to that. I must stress that it was sometime ago and I had positive experiences ever since, although I must also admit that in this time I avoided Essex.” 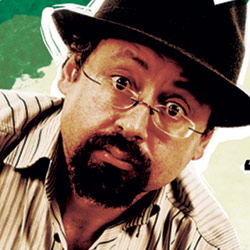