Emerging from the renowned comedy hotbed of accountancy, award-winning comedian Tom Goodliffe has quickly made a name for himself with his unique blend of smart gags, charming storytelling and a hugely likeable stage persona. Martin walker asks about his Edinburgh Festival Fringe offering.

“My show is called Thug Liffe and is a stand-up show about hip-hop by an accountant. The accountant is me; I haven’t paid my accountant to write the show. It is much funnier this way, largely because I don’t have an accountant. What does an accountant-turned-comedian have in common with gangster rappers? You’ll just have to turn up to find out. No excuses – it’s free!”

“I think free shows are great part of the Fringe. They allow both the public and performers to take a few chances. The Fringe is so expensive for comedians and audiences; it’s difficult to take too many risks with buying tickets unless you have Scrooge McDuck levels of cash. I did free shows with Laughing Horse in 2008 and 2009 which were not only lots of fun but also a vital part of my development as a comedian.”

“As far back as I can remember, I’ve always loved stand-up comedy. As a teenager I watched VHS tapes of Eddie Izzard until they were etched into my memory. I went to university in London partly because at the time it was the epicentre of world’s greatest comedy scene and in 2003 I visited the Edinburgh Fringe for the first time and was hooked. Several years later I finally grew a pair, took a stand-up course and launched myself into the open mic circuit. The rest is history and, due to the money I’ve spent on trains to gigs, geography and maths.”

“When I first started there were very few weekends gigs for newbies. One way to get spots was to flyer for the gig. I remember doing 3 hours flyering in Leicester Square in the dead of winter for a 5 minute open spot. I was so good at the flyering that when I got introduced the entire audience went “You’re not a comedian, you’re a flyerer!” I got through about 5 one-liners before I bailed so they could listen to the “real comedians”. Comparatively speaking, all the other experiences are the best ones.”

“What a question! How long could the show be? Am I allowed to book comedians who shun TV, or are dead? Can I answer this question with any more questions? Nope? OK. Kitson MCing, then in no particular order: Louis CK, Bill Burr, Maria Bamford, John Mulaney, Mike Birbiglia, Demetri Martin, Patton Oswalt and Jon Dore.” 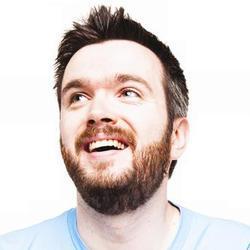