This show is about how I was in a false alarm terror attack back in 2017. For 3 hours me and a few thousand other people (including Olly Murrs) on Oxford street thought we were under siege from Isis. It was terrifying and ultimately embarrassing but this show is a comedy hour about the events of that day and how we all behaved/ responded.

You debuted in 2018 with his critically acclaimed show Seeing Red. How does this show differ? Is it a departure or are you building on similar styles and themes?

Seeing Red was my first hour- this is a bit of a departure from that. That show kind of looked at my name, where I was from and how I got street cast to be audition for the role of Harry Potter when I was 9, ultimately losing out to Daniel Radcliffe for a life of fame and fortune.

There are similar themes though, I think in both shows I look at human achievement, my role in the world and cowardice. ’Shots fired’ is set around 3 hours of my life, 3 hours where I thought I would die so it’s a lot more fast paced slightly darker and a bit more pathetic. It’s funnier too!

You’re a successful performer, writer, and podcaster. Tell me about the very popular podcast Laughable which you co-created and co-host. Any other current podcast projects you’d like to tell me about?

Laughable sadly came to an end last year, I am now the co host of The Year Is with Bobby Mair, we basically go back to a year in History every episode and look at the funniest or most insane things that happened that year. We have been doing it since December last year and are at war with the Mary Rose museum- I accidentally got the date of the sinking of their ship by 100 years and we have been in a huge online spat with their museum team ever since.

Where does the name Red Richardson come from?

My Mum and Dad watched a Clint Eastwood cowboy movie called ‘for a few dollars more’ on the day I was born and there was a drunk bit part called Red- he’s in one scene and Clint beats and then murders him. They decided that’s who I reminded them of and called me Red. They could’ve called me Clint.

People have been calling you the Lionel Messi of comedy, why is that?

I actually don’t know how that nickname came about, people just started calling me it in green rooms and audience members would come up after gigs and it just stuck, I actually get quite embarrassed about the nickname so don’t really like it being mentioned but there’s nothing I can really do about it now. I suppose it’s nice to be called that- but I don’t get caught up in it all, I keep my head down and try not reflect too much that people are basically saying I am the greatest of all time on a regular basis. I am super humble which is I suppose part of the reason I am such a talented and brilliant man. 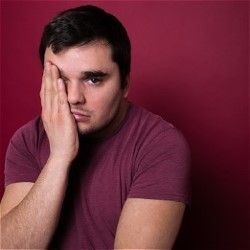