Hi Grace! Tell me about your 2022 Edinburgh Festival Fringe show, A Show About Me(n)

A Show About Me(n) has a double meaning. It’s a show about me, and it’s a show about men. But mainly, it’s a show about me, and my relationships with men, and my observations of them because, lets be honest, they are HILARIOUS. It’s about my lifelong internal battle of not knowing who I should prioritize more; me, or the men in my life. It’s a relatable show (unlike my last Edinburgh show), because the need for male validation is something that so many women will relate to. After all, from birth, women are made to feel by society that they have to seek after men for validation, and the show is a wildly funny hour about how I got to a point of really not caring about male validation. I think it will be enjoyable, and entertaining, for all genders.

I really enjoyed your 2019 show, Why I’m Never Going Into Politics. This sounds very different.

This show is totally different than my debut Edinburgh show. With my first show I was addressing the elephant in the room which was my childhood and my upbringing in politics, and my relationship with my dad (Alastair Campbell) as a political person. I really enjoyed that show but now the material I’m writing is much more personal about my life, but it’s also much less directly about Westminster politics and more about the politics In my silly life.

In this show, my dad is just my dad, and a male figure whose been there in my life, and still, as ever, he is one of the muses for my comedy, and there are some really funny bits about him in this show. But he is less Alastair Campbell, and more just my dad, in this show, which I really like. But also, most importantly this is a show about me, there are enough shows about politics, and enough about men, but crucially, there aren’t enough about me, Grace Campbell, so I’m really filling a huge gap in the market, doing god’s work.

Tell me about Riot Girls.

Riot Girls was a feminist prank show that I made for Channel 4 with three amazing comedians (Sophie Duker, Cam Spence and Jen Wakefield.) We were pranking the public with fun pranks addressing sexism. We did stunts on manspreading, period shaming, the lack of public toilets, or pubes. It was so much fun to make, and it was actually after filming Riot Girls in 2017 / 2018, that I decided to start doing stand up. Really it was the other girls in the show who completely encouraged me to, because they thought I was hilarious, which I am, and now here we are.

Tell me about The Disgraceful Club.

The Disgraceful Club is a comedy club I run, and I host. At each show I bill a line up of exciting and established female & LGBTQ& comics. It’s a guaranteed wild night where literally nothing is taboo and comics, as well as the audience, shed a lot of their shame. I’ll be hosting these weekly while I’m at the fringe. Expect me, some exciting acts that I’ll be booking for each week, and also if you’re single and looking to meet people, off the apps, and IRL, then this is defo a night for you, as I have an element of speed dating, setting people up during these shows, which is super fun.

What Are You Excited For This Fringe?

My Edinburgh show this year is like my most exciting body of work so far, honestly. I feel like my comedy has just elevated to a new level in the last year, and I’m SO excited to elevate it even further, in the motherland, Scotland. This show is an expression off all the realisations I’ve had recently, and I think so many people will relate to those. I was inspired by the men in my life, but also by the women, who made me feel like I’m not alone in dealing with men, and the turmoil of relationships with them.
I’m also really excited to be single at the fringe, because hopefully the chaos that transpires from that will help me write my next show. The content is endless! 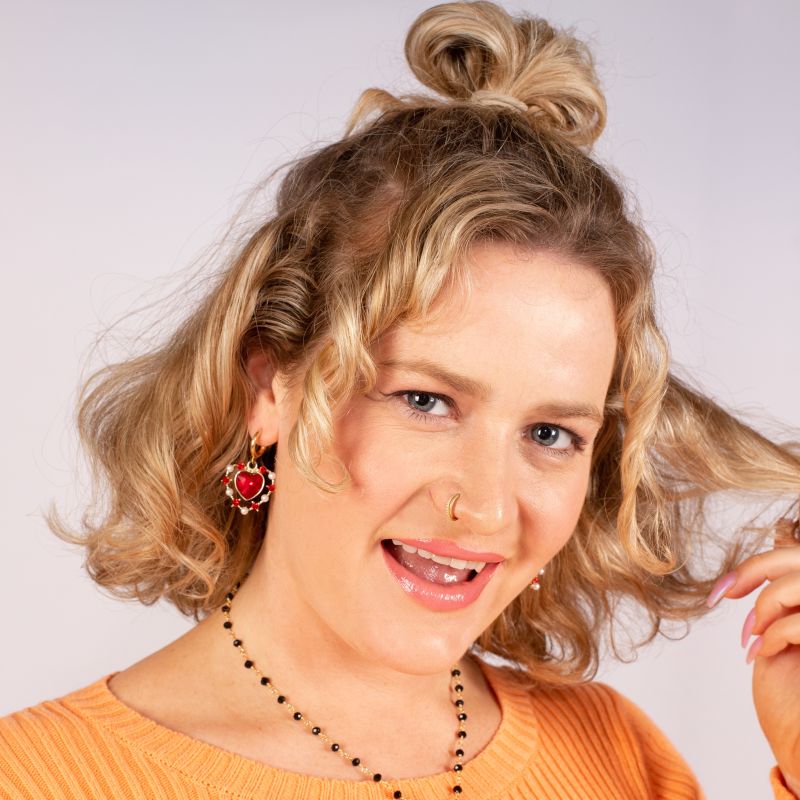