The Not So Late Show with Ross & Josh is the UK’s finest (and possibly only) chaotic, multimedia alternative comedy chat show. We hear from Ross Brierley.

Hi Ross, tell us about The Not So Late Show with Ross & Josh.

It’s a spoof alternate reality chat show with special guests, nonsensical games, short films and fake adverts hosted by me and Joshua Sadler. We’ve been doing it as a monthly show for a couple of years in Leeds and it’s time we took it further afield.

As it’s the first time we’ve taken a show to the Fringe, it means anticipation, excitement and a fulfilment of ambition! We’ve visited plenty of times but it’s going to be incredible to be right in the heart of it for a month.

Vic & Bob were the original inspiration for both of us. Just for pure commitment to what they thought was funny, regardless of whether it made any sense whatsoever. The same goes for Harry Hill, The Mighty Boosh and Big Train.

The best was probably the first hour long preview we did at the Leicester Comedy Festival. It was packed and it was the first time we’d condensed our monthly show into an hour. It went down a storm and was a ridiculous amount of fun.

The worst was possibly in Hull, where we returned to the Comedy Festival for the second year running after a fun filled debut but everyone was very confused about the whole thing and had clearly forgotten what the whole thing was all about. Or the time Ross did King Gong when he first started comedy and he was gonged off three times in the same night, totalling about 25 seconds of stage time combined.

Well we’ve only had one specific review of the show and that was in the Yorkshire Post. They sent a theatre critic along to review it, giving us a hugely positive write up but seemingly being quite confused by the whole thing at the same time.

A book called ‘This Book Could Save Your Life’ by A.M Holmes. A darkly comic and sparsely written account of a man who discovers possibilities in life after years of self imposed solitude though donuts and chance encounters. It was good!

Well it would obviously be The Not So Late Show with Ross & Josh. We would get our good friends Larry & Paul and a host of up and coming comedians to help us fill the airwaves with high class nonsense. 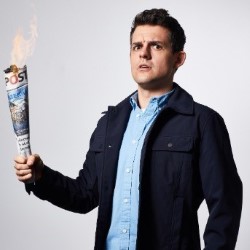