Ian Smith’s new Edinburgh show is called, ‘Ian Smith: Snowflake’ It’s about uniqueness… like everybody else’s. It’s also about a holiday he had in Tromso, Norway. We asked for the deets.

Hi Ian, tell me about your Edinburgh show.

I spend too much time at home eating flapjacks – so I thought I best get myself to Norway and see the Northern Lights. So I whacked on some thermal socks and did all sorts of fun stuff, like nearly killing a man in a sledding accident and eating alone in restaurants paranoid that people were looking at me. It’s also about something a University lecturer said to my class – that we’d never have an original thought in our lives, and how my trip to Norway (and a fishcake recipe) disproves him.

It means I’m going to be having battered sausages and going to a steam room more often than usual in August.

Watching Chef’s Table on Netflix is really inspiring – they’re artists on that show and they’re attitudes to creating and working hard are completely transferrable to stand-up. Especially when you have a joke about fishcakes.

I once stage-dived into some empty chairs because the other people in the crowd didn’t seem up for it. That can do under best AND worst.

When I started out I had a review that said I subsisted telling jokes with just standing on a table and shouting. I felt like I was doing both, but fair enough. That was a long time ago. No tables for me anymore.

Maybe a lawyer – but a funny one who would say things like, ‘Have you changed your hair?’ to the judges! HAHAHA. They’ve always got the same wigs on! Classic.

A Behanding in Spokane – an excellent and very, very, very funny play by Martin McDonagh.

Will Popatron be getting another series Ian?

It’s been 7 years mate, it’s not coming back! Nobody even remembers it. Get over it. 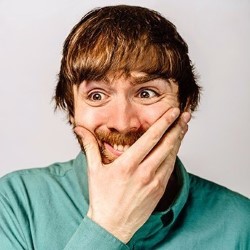