Sleeping Trees at the Movies features three separate comedy blockbusters, being performed in rep at this year’s Fringe. We fired over a Q&A to Sleeping Trees member James Dunnell-Smith get more info.

Hi James, tell me about your show, Sleeping Trees at the Movies

Each show parodies a different a genre, Mafia, Western and Sci-Fi, and we are given the challenge of bringing each one to life without the assistance of any set or props. All we have on stage with us is a one man band who provides a unique live score for each show, which really adds to the live movie experience we were aiming for with this trilogy.

We all hold our own individual inspirations, comedians and actors we have grown up watching. I was always particularly inspired by the likes of Rik Mayall and Rowan Atkinson. Collectively we are all big fans of groups like The League of Gentlemen and The Mighty Boosh, we’ve always found the darker, more left field style of humour most appealing.

One of the best AND worst experiences we had on stage was last year where the power to our venue cut out, so we lost all light on stage. The entire audience then put their phones on to light us up and we did the next five minutes lit by them, until the power came back! Our audiences are the BEST.

We got a one star review for our first show back in 2011. The guy just absolutely hated it. Think his name was Andrew Gervin, not that we’re still bitter or anything…

It was actually John Cleese’s autobiography! I highly recommend it, particularly to anyone getting into comedy.

Would you rather live among pandas or sea lions?

Pandas for sure, not about that sea lion life.

It would be a demolition derby style show with the cars being driven by ageing celebrity chefs. I reckon Gary Rhodes would be a nightmare behind the wheel. 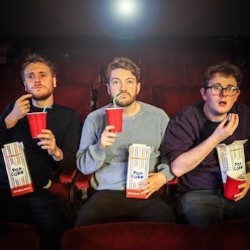