Tell me about your 2022 Edinburgh Festival Fringe show, Andy’s Moon Show – How Much is the Moon Worth?

In this comedy lecture, we explore the various ways we can value the moon, from the theoretical capital ventures (Helium 3 mining) to the more tangible stuff that we can hold in our hands (such as Lunar Meteorites). Plus, we’ll talk about how the acre of the moon you’re Nan got you for a 12th birthday present is basically worthless, the man who decided that he owns the moon (and is a millionaire because of it), and the great Floridian moon rock caper.

Tell me about your 2022 Edinburgh Festival Fringe show, Andy’s Moon Show – How to Fake the Moon Landing.

Conspiracy theories are everywhere – especially post-pandemic and more so because of the Russo-Ukrainian disinformation war. While many of these theories are so eye catching they sadly can lead to dangerous real-life choices such as denying medicine for yourself and loved ones. So I thought let’s look at one of the most infamous ‘gateway’ conspiracy theories – the idea the moon landings were faked. In the show, we break the theory down, look at the science and figure out just how would you fake the moon landing. And in exploring this idea it quickly becomes clear that it’s so much easier to actually go to the moon than fake the moon landing.

After finishing my master’s in physics I, like most graduates, found myself in a soul crushing desk job not able to apply any of the knowledge I had acquired over the last four years. So I started the Lunartic channel as a creative outlet and to chat about one of the courses I found most interesting. I want to make one video for every moon of the solar system. Small problem though, since starting the channel I’ve made about 30 videos, but since I launched Lunartic about 50 more moons have been discovered. So I’m actually now net ‘minus 20’ moon videos on where I started. Oh well…

How does it feel getting up on stage after spending so long in lockdown?

It feels amazing! I’ve been scratching the showman itch with bad karaoke and hosting pub quizzes so it will be amazing to get back up on stage and do a show that I created.

Great question! It’s gotta be Miranda, an icy moon of Uranus covered in these incredible jagged glaciers that create the biggest cliff in the Solar System – it’s called Verona Rupes, it’s 20 km (12 mi) high and if you jumped off it, it would take you 12 minutes to hit the ground. Plus the moon looks AMAZING in the voyager images.

Note to editor – don’t worry, all images of Miranda are public domain photos. 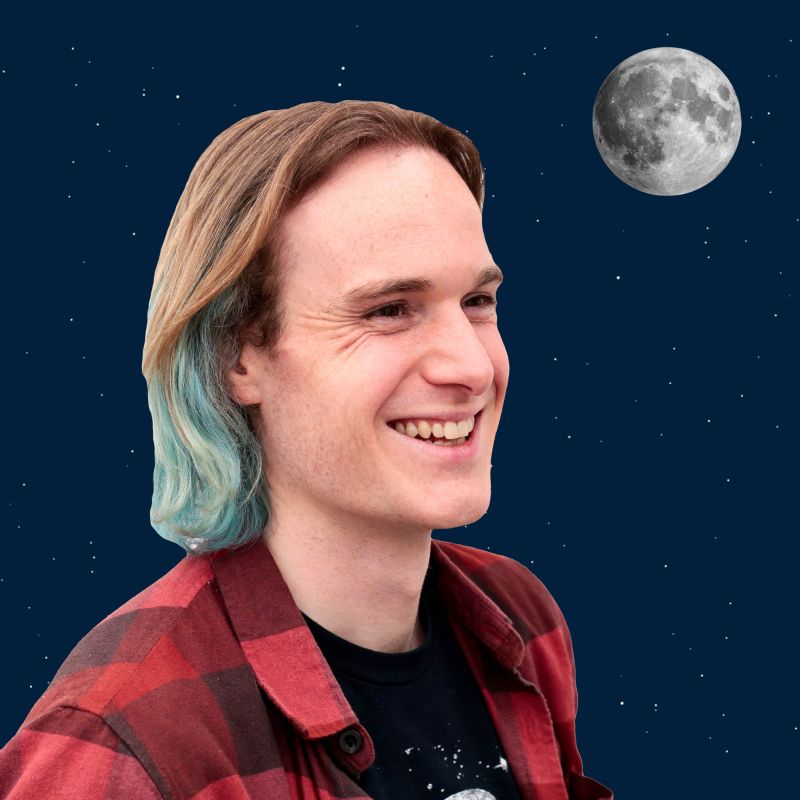