“My Edinburgh show is called Wild Card Kitty: The Showgirl Show and features three character creations: a young girl desperate for fame no matter the cost, a bored diva at the pinnacle of her career and a lady in her twilight years who was a former Broadway star. I mix cabaret and comedy to create a unique set of characters that range from tongue in cheek to pitch black and acerbic to touching. I’m poking fun at show business and enjoying being ridiculous at the same time.”

“The blunt version is that I couldn’t afford to do the Fringe otherwise. I’m a freelance creative but I earn very little and it’s a vital service that these guys are providing to performers and performance companies – many of us wouldn’t be able to perform otherwise. There’s been a massive backlash against the more “corporate” venues over the past few years and the Free Fringe has grown as a result and is being taken much more seriously than it was when it first started. People don’t talk about the companies that financially ruin themselves or the people that have breakdowns because of stress at the Fringe over the money they are losing and the Laughing horse is step in the right direction towards valuing the Artists and the performance art over the business side of things.”

“Ha! Life pointed me in the direction of comedy and I realised that it made total sense. I’ve been working in Cabaret and Burlesque for years and whilst I love them comedy seems like the right genre to house my idiocy and crazy ideas. After much cajoling from friends I put my name down for performing at The Stand in Edinburgh or Glasgow. I was told the waiting list was about 6-9months. 3 months later I was told my first performance was on the following Monday giving me 6 days to get a 5 minute act together. They say talk about what you know, so showgirls, strippers and backstage nonsense it was!”

“I’ve only been performing comedy for 9 months so fingers crossed haven’t had any really bad experiences so far – a few nights where you’ve had to go straight home as there’s been no audience – best – definitely when I turned a night around, the audience were pretty hostile and heckling. When I went on they loved it and I took the piss out of a heckler and got a round of applause. I won them over. I think generally if people laugh when you’re doing comedy, it’s a good thing!”

“Eddie Izzard, Nina Conti, Louis CK, Margaret Cho and Dylan Moran. If they could all do each other’s acts, that’d be even better. It’d really mess with the audience…” 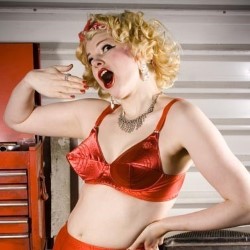