Jack Barry is probably the only stand up on the circuit with a degree in Chinese. Martin Walker asks if the degree has ever done him any good and, more importantly, about his part in the two shows he is bringing to this year’s Edinburgh Festival Fringe.

“The first is the Comedy Zone, which I feel very lucky to be a part of. Every year they take up 4 ‘up and coming acts,’ and some truly brilliant people have done it over the years. This year they picked three awesome dudes – Alex Smith, Steve Bugeja and Adam Hess – and then panicked and at the last minute chose me as well.

“The second is a double act show, called Twins, which I’m doing with my twin sister Annie McGrath. We’re twins. It’s a rather silly attempt by two idiots to put together a sketch show and largely failing. That one’s free though, so…come?”

You toured with the brilliant James Acaster. Any back stage gossip?

“Yes, I did twice. He’s a great chap who I owe an awful lot to. There wasn’t much gossip, my girlfriend broke up with me on the first day of the last tour so he mostly just nursed me through that on the long car journeys. On the second day we had the best show of either tour, in Sheffield. We were so pumped, I thought everything might just be ok. Then my car broke down and we were stuck in the outskirts of Sheffield for three and a half hours waiting for the AA. James bought us Domino’s and we deliriously agreed that this was the confirmation we needed that there is no God. What a guy.”

You were part of the Pleasance Comedy Reserve last year. Tell us a bit out what that is and how your involvement came about.

“I was just very lucky. I auditioned at the Pleasance and they had a fit of insanity and decided to put me in it. I felt so spoilt. They put us up in a lovely flat in Edinburgh and treated us like kings. The other guys – John Hastings, Tom Toal and Tez Ilyas – I was doing it with were amazing as well. When my, now ex, girlfriend came to stay I introduced her to Tez as he came out of the shower and John pulled his towel off and he had to run naked into his room. It was the funniest thing I’ve ever seen.”

You have a degree in Chinese. Does that ever come in useful whilst performing, or on the road, or in any other circumstances?

“Absolutely not. I’m sure I could have got a great job in the government or something by now if it wasn’t for stupid comedy. The only thing it’s been useful for is getting the occasional discount from impressed staff in Chinese takeaways. I’ve spoken it in shows once or twice but people think that I’m just being racist and making it up.”

“All my mates, so we could have a bloody laugh, for once. Mae Martin would MC, get everyone drunk and we’d have a lovely time.” 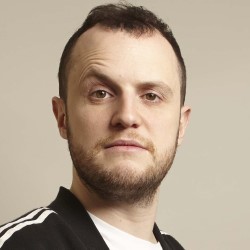