At this year’s Edinburgh Festival Fringe, Patrick Turpin presents an hour of sentimental mush, misguided enthusiasm, and some divvy chat about his Dad. Part stand-up, part anecdotal love-in; we’re promised that this will be Turps at his sassy best…

“My Edinburgh Fringe show is called A Brother For Jonathan, and it’s a bit of a wolf in sheep’s clothing.

“It’s supposed to be a confessional, heart-felt, and empowering hour about teenage anxiety, self-consciousness and the struggles of childhood (yawn!), but really it’s just about my balls (and sneakily finding new secret ways to talk about my balls). It’s at 12.30pm and will put people off their breakfasts (although in my experience, Scottish breakfasts are quite good at putting people off their breakfasts).

“In all seriousness, this show is just my 2014 submission for the Foster’s Edinburgh Comedy Award competition we all enter every year. So sue me (for anything but failing to meet the required entry criteria).”

Tell us about your involvement with the production company, Berk’s Nest.

“I met these guys when I was 22 (four years ago), and they are like family. Berk’s Nest have had a hand in all of the shows I’ve done in Edinburgh over the last three years, and if it wasn’t for them I would be a far worse performer than I am today.

“They give me the confidence to take risks, and I owe them a lot because of that. They are an incredibly conscientious, passionate and intuitive bunch, and it feels like they’re building something authentic (rare at a festival dripping with so much bloody money, am I right!? #fuckmoney #hateGove).

“When you’re a solo performer being part of something larger is so incredibly valuable. I think my show is quite good, and that is down to them.”

“All I can focus on is the word ‘might’ in that question. By that I mean, not that many people ‘might’ have seen me…

“I would describe my comedy as pretty stupid. It wallows around in self-ridicule, awkward turns of phrase, and fairly obtuse cultural references. It’s also a bit observational as well – which is sometimes seen as a bit of a dirty word in comedy at the moment, but if it’s done intelligently then it can be really quite lovely.

“Oi, Turpy! The Creative Zen will never overtake the iPod.” 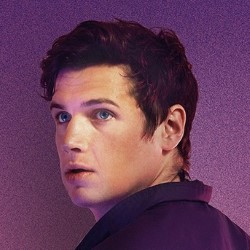