London based Jessica McDermott graduated from the Glasgow School of Art in 2008. Her most recent project, Females of the Fringe, features thirty-two women comedians and documents their opinions on gender and comedy. The book includes Sarah Millican, Susan Calman, Lucy Porter, Zoe Lyons and is out later in 2014.

How did you get the idea for ‘Females of the Fringe’?

The project was a follow up to a group photograph that I’d taken at the Fringe 2009. Susan Calman had organised an event to counter claims made in the press that there are only a handful of women comedians and that that’s why they are under-represented on television. I volunteered my photography services as I was keen to be involved. Eighty-one female comedians featured in the photograph, which was later published in Time Out. The atmosphere was really positive with the comedians referring to it as a ‘class photo’. In spite of this event, which received a fair amount of publicity, the number of female comedians and their abilities continues to be debated. And so I decided that I wanted to go back to the Fringe and this time do an in-depth project, which was less about volume and more about individuality. I wanted to talk to the comedians about comedy and to hear their opinions on gender, rather than hear the opinions of journalists or other members of the industry. It is becoming harder for promoters and TV producers to deny the growing numbers of women comedians but there is still this ever present view that a female comedian’s gender is inherent to her comedy, in making this book, I want to try and help shatter that glass ceiling.

So you ended up with thirty two women.

I had a loose criteria – I only photographed comedians who had brought up a solo show or comedians who were doing a full run at the Fringe whether that was a solo or package show or something else. And I wanted to get a good cross-section of comedians for the book – from those who have been in the industry for a long time and are well established comedians to those working their way up the ranks. I’m very pleased with my final thirty two.

You have a background in comedy.

I worked at The Stand in Glasgow for over five years, and before that I worked at Jongleurs, but that was much briefer! I worked there while I was at art school getting my photography degree and for a bit after I graduated while I built up my portfolio, which started to feature a lot of comedians as I began taking headshots and making Fringe promotional images. When I worked behind the bar at The Stand, sometimes when female comedians were on, I’d witness sighing, arm-folding and disgruntled comments before they even got a chance to utter a word and this always grated on me. I guess thinking about that, making this book was always somewhat inevitable.

How do you feel about the BBC edict not to allow any more all male panel shows?

I agree with it to a degree, but what I don’t understand is why they felt the need to announce it. The most important thing for me about making Females of the Fringe was to highlight the differences between female comedians; this edict from the BBC only serves to reinforce a division of gender within comedy. I think the BBC should diversify the way they choose panellists for their shows and they certainly shouldn’t be excluding female comedians on account of their gender, but by announcing this new policy, I think it’s just served to place female comedians under fire. Following the announcement, there seemed to be a bit of a media frenzy, with female comics being asking to speak on behalf of their whole gender and field accusatory questions about positive discrimination. It’s hardly empowering or particularly helpful to female comedians or reticent audiences to suggest that their presence on television is to fill some sort of quota. And to those who have argued that panel shows are more of a male domain because they’re all about who can shout the loudest with gung-ho one-liners, that’s assuming that all panel shows have to be some sort of Top Gear for jokes. There are already many panel shows that don’t rely on this format and there are many more genres within comedy that could and should be represented on television panel shows. If you were to mix up the style of comedians on these shows and choose them based on what they can bring to the table you would see a lot more women and more of a variety of male comedians that previously didn’t get a look in. It’s just about opening your eyes to the different talent that’s out there and if you see it that way I don’t think gender even needs to come into it.

If you were curating your own TV show, who would be your guests?

Oh now that’s a question, isn’t it? I guess the standard is six guests, so I’d have five of the comedians from my project and one token male! No, I don’t know specifically, but I’d choose a mixture of styles – an observational comedian, a surreal comedian, a character comedian, a deadpan comedian, a loud outspoken comedian and a musical comedian, now that would be interesting, wouldn’t it? But the host and the team captains would most definitely be female. If producers want to prove to the cynics that these new policies are not just tokenism, show off the female comedic talent you have and give them regular spots – you have to give people a chance to show you what they can do and then you can pop them on the big bucks too!

Gonna push you a wee bit… can you name your six comedians?

OK, I’m going to choose my guests based solely on my desire to push my book and therefore take all my inspiration from that. Obviously this is tough and there are many talented comedians I could choose from, but if you’re going to force my hand for the first show I would invite Tanyalee Davis, Cariad Lloyd, Helen Arney, Mary Bourke, Janey Godley and Adrienne Truscott to be my guests. And it would be amazing!

You can now buy pre-sales of ‘Females of the Fringe’ on Jessica’s crowdfunding page here: 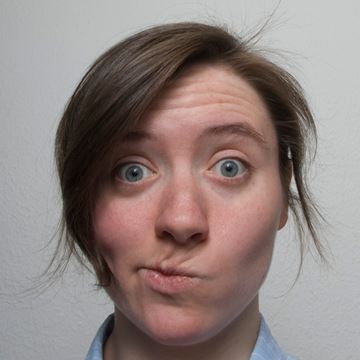