Richard Herring is one of the most prolific comedians in the UK. He’s an author of several successful books, a regular columnist for The Metro newspaper, a prolific and award winning pod-caster, a radio DJ and touring stand-up comic. In, Martin Walker’s first full length interview for Broadway Baby, Richard discusses death, life and DVDs.

Richard’s latest show, ‘We’re all Going to Die’ seeks to demystify death. It was a huge hit in Edinburgh in 2013 and has been touring practically ever since. Not the most obvious subject matter for a comedy show perhaps.

“I have done big subjects with my last few shows: love, religion, politics and penises, so it seemed appropriate to go for death next. And it’s a subject that has always fascinated and scared me, but one that people aren’t keen to discuss openly. I have always found these are great ingredients for comedy, which should be used – at least partly – to explore the issues that are contentious in a safe environment. Death is universal and inevitable and also a force for enormous good, but that’s not how we view it. So I wanted to do a show that looked at that, with the additional challenge of making people laugh at a subject that is generally regarded as unamusing. I was worried in the early days of writing that I wouldn’t be able to do it, but I am enormously pleased with what I’ve come up with – and it’s still developing.”

Richard has become an Edinburgh Fringe mainstay, with each show attracting a greater profile than the last.

“I am doing Edinburgh again in 2014 and for the new stand up show I have decided to start with the notion of doing something that is just about finding the joy in life, with no serious issue behind it. It’s called ‘Lord of the Dance Settee’ and I want to release the inner child that I’ve been only mildly holding back in the last few shows. And celebrate being uncool. And maybe try to do a show with nothing “offensive” in it and that isn’t about taking the piss out of bad comedy or comedians, which I feel is being overdone a bit now. But it’s early days and anything might happen and I’d be surprised if there’s nothing about cocks in it!

“I am also writing a more serious, but hopefully still amusing play called “I Killed Rasputin” about Felix Yusupov, one of the assassins of the Mad Monk. I have decided to take some risks this year, mainly financial, but also artistic. I write scripts for TV all the time that rarely get made, so I’ve decided to just make this one myself, even though it’s likely to cost me a lot of money. I might have bitten off more than I can chew this year, but I am glad to be still pushing myself.”

“Chris Evans – not that one, or the one from Captain America – saw a Stewart Lee gig and asked when it was coming out on DVD. Stew had no deal and so Chris said he’d do it for him. Then when that went well, Stew recommended me to them and them to me. I met up with Chris who agreed to release a rough version of the ‘Hercule’s show that someone else had filmed and to film ‘Someone Likes Yoghurt’ for me. I had been frustrated that the shows I was doing in Edinburgh and on tour were disappearing into the void, so this was perfect for me. At the very least it meant the shows would still exist in some form. I liked the way Chris and his team operated and that he was concerned more with putting out good comedy than making money. It was an important meeting for me. I am not sure that I would still be doing stand up if it wasn’t for this outlet, but I certainly wouldn’t be able to do my filmed internet projects without Go Faster Stripe.”

Richard Herring’s Meaning of Life is an attempt at making a free to view online TV show. According to the Go Faster Stripe Website, it’s going rather well, but they need money to pay for the production. A thirty minute cut of the show is available for free but an extended version is available – along with a ‘making of’ video for each episode.

“I think the series of six is likely to cost between £20-£25K. This is very cheap for a filmed series, but then neither the writer nor performer – me – is getting anything for it. I have found that my free podcasts have brought in new fans who then come to see me live, and so though it’s indirect that’s how I end up getting paid for it. So with this project I didn’t want to only make it available to fans who were prepared to pay, so there’s going to be free versions of each episode up on vimeo.com.

“But then there are episodes with about twice as much material available for those who are happy to pay, either on audio or video. And for those people who don’t want the longer versions – they should want them, there’s some great stuff held back for them – I thought it would be nice if people could just make a small donation to the cost of what they’ve seen. So we’ve made “I Paid A Pound” badges which we are selling online and at gigs and “I Paid More Than A Pound Badges” for anyone who wants more. I have enough listeners to these podcasts that if all of them would even give me a pound a year we could do some amazing stuff with that money. But most of them can’t or won’t pay. I hope they will reconsider if they can afford to, as we are sincere in our desire to use that money to make more ambitious internet content. People also have the option to pay a pound or more a month, though all that money is being ear marked for future projects like a monthly video version of ‘As It Occurs To Me’

“You also get special offers, entry to monthly draws for prizes and an exclusive channel of extras for your money. I am hoping I can get people used to paying for their online content but only a tiny amount. The beginnings are modest, but better than I thought they would be. If we can get about three times as many people to donate monthly as are doing so at the moment then a monthly show should be possible.

“Meaning of Life is really an experiment to see if it’s possible to put together something half decent with limited time and money. It would be great if we had the funding to spend more time on future projects and give them better production values.”

“Someone decided that they wanted to have a radio station on the internet without any restrictions on content and asked me to do a show. In a year where I am doing something so much for free (or at my own expense) it’s nice to have a paid weekly job and I always loved doing radio shows, so it’s great to have another crack at doing one. I was allowed to pick my sidekick and chose Lou Sanders who is a very funny, candid and slightly crazy comedian and it’s fun. I don’t run Fubar so don’t know how it works or if it will work, but again they are hoping that people will pay a small monthly fee in order to listen to loads of comedians being funny. I know from my own experiences that this is a leap in the dark, but I hope people will get behind it.”

Richard is so busy I wonder what is proudest professional moment is.

“I think just keeping going is the most impressive thing. I’ve been touring the country as a solo act over the last decade and a bit and built up my audience from an average of about 50 to probably nearer to 300 and often get over 400 people in to see me. Without any major TV exposure that’s something that’s quite impressive. I’ve built it up through hard work and persistence and by getting out there and doing it. And that’s made me a much better comedian. And also I’ve got on and just made podcast shows when radio and TV people weren’t interested or were dragging their heels. I hope the best thing I do professionally is yet to come. But I am proudest of still being here and having done that largely under my own steam.” 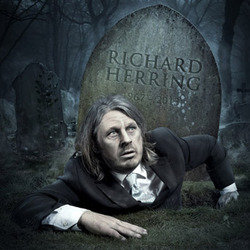