Sugar Daddy is about meeting my partner Jonathan, and then my relationship to grief after his passing in 2021. It’s a series of funny stories that I hope paints a picture of what its actually like to grieve someone you love.

Talking about things on stage that are so personal, like the tragic death of your boyfriend to Covid, must be challenging. Is it hard to find the funny in real life events that mean so much to you?

Talking about Jonathan can be difficult for me, but I’ve actually never struggled to find humor in the tragedy. It’s one of those things that’s just inherently funny, and I think most people who have been through it would agree. I don’t think there’s any comedian as funny as my gay widow support group.

That being said, getting audiences to laugh at grief comedy is a whole other challenge. I bombed with grief material for months and months before I was able to figure out how to trick the audience into relaxing into the material. Writing and performing grief material about my late partner that consistently hits is the thing I’m most proud of accomplishing as a comedian.

How have things changed for gay people in the US over the last few years? Is it getting better or worse?

I live in New York City and I’m pretty sure it’s illegal to be straight here, but I’m an ally.

Cities in general I do feel more and more safe in, but I don’t know if we’re actually making progress as a country. I still feel a lot of homophobia whenever I travel and perform especially in more conservative, less densely populated areas. After the Roe V. Wade decision, there is a lot of genuine fear that gay marriage could be overturned, and I believe even just the fact that it it is a possibility is emboldening homophobia.

We loved your 2019 Edinburgh Fringe show, Hello Daddy – about your attraction to older men. I noticed at the time that you had a really mixed audience, straight and gay adults of a range of ages and backgrounds. How does an American, “anxious gay diabetic Jew” (it says here) enjoy such wide appeal?

WHAT DID YOU CALL ME?! Hahaha yes I have “anxious gay diabetic Jew” in my press release, and it’s true. You can even go ahead and add in asthmatic. You really can have it all.

I love having a diverse audience. I believe most comedians do. Monolithic audiences are always harder to play for. Whether I like it or not, most of my crowds are straight. It can be frustrating, but I also enjoy playing with the differences. I talk about poppers in my show, and for most club crowds in NYC, that joke can go over their head. I went viral on TikTok recently by asking every straight member of an audience if they knew what poppers were.

I sometimes forget how much I cater to straight people until I go to all queer spaces/cities, and I feel so much more comfortable and connected with the audience. I’ve performed in Provincetown every year since I started comedy and see it as a kind of home base. For the most part, I really just want audiences that are comedy fans and not homophobic. I can usually tell if they are within the first few minutes by what they laugh at and how they laugh. My audiences in my recent touring have been a perfect mix of daddy bears, lesbians, and type 1 diabetics.

My show in 2019 was called Hello, Daddy! and the poster was me shirtless in a harness and handcuffs smirking at the camera. So a lot of gay men came and were like why’s he talking so much and with his shirt on??? On the other hand, there were straight drunk tourists who seemed to just stumble in and were

not necessarily comedy fans, and certainly not ready for vulnerable narrative based comedy. As far as I can see, it’s less about gay or straight but it takes many years to find your audience at Fringe and successful performers hone a unique comedic voice that garners a unique following. I hope as my career grows, I can reach an audience that allows me to be most be myself, and give them the best show I can.

What’s your favorite joke in the show?

It changes often but this is my most recent and extremely fun to perform: Peak pandemic i was in a zoom acting class. One week i forgot to edit my scene, and you heard me off screen fight with my boyfriend for 3 minutes. At one point he said “fuck your little class”, and I said “This is all i have!”, and then the teacher was like, “Finally, some authenticity Sam.” 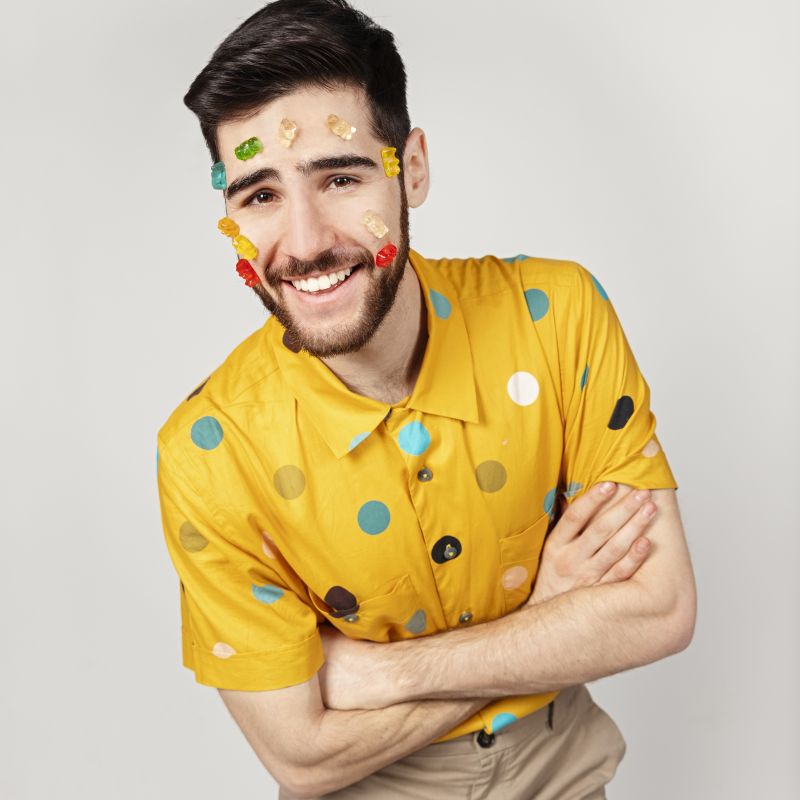