Jon & Nath Like To Party is sketch comedy with the pace of The Fast Show and the very real slapstick of Bottom. We fired over a Q&A to Jon Levene and Nathan Lang to get more info.

Hi guys, tell me about your show.

A mischievous new sketch comedy show from two best friends who can’t stand each other. Action-packed sketch, crackling satire, outrageous impressions and some pretty hardcore physical comedy – including the hottest (and possibly only) Jehovah’s Witness act in town. We have some huge guest stars*, an exorcism and one of the most advanced robots ever created**.

Edinburgh Fringe is a showcase of the world’s finest comedy. To be part of this is something we dreamed about for years while performing at the Melbourne International Comedy Festival. We’ve travelled half way round the world for this, we’ve worked on this show for over a year, done gigs all across the UK, fine-tuning our material to make it the best it can be… so pop down to Cowgate and see us. It’s free.

While Jon is inspired by the improvisational skills of Danny McBride and Larry David (yet, still – strangely – hates improv), it’s because of The Young Ones that he wanted to pursue a life in comedy. Nath loves the slapstick and chemistry of Terence Hill & Bud Spencer, and also the cerebral wit of Woody Allen and Gene Wilder, except for the bestiality bit in Everything You Always Wanted To Know About Sex* (*But Were Afraid To Ask). He loves his dogs, but that’s not cool.

Opening night of our Melbourne show The Moral Dilemma was a packed house and we sucked hard. It was so bad Jon’s girlfriend dumped him*. We drastically re-wrote it overnight.

Opening night of Jon & Nath Like To Party at this year’s Brighton Fringe was sold out and we got a 4-star review calling it “comic brilliance”. We still re-write bits after every show.

Jon: The Sea Between Us – a self-published book by my friend Peter Noyce. I don’t want to draw attention away from myself but he lived in Mexico for years and wrote about it. It’s a great book for anyone who has or has not been to Mexico.

Nath: Most days I just have my head stuck in my cryptic crossword book to stave off early onset dementia. (Jon just called me a fucking nerd.)

Nath: Jon, why don’t you just go solo and stop splitting the profits with an ingrate?

Jon: I intend to.

Jon: Nath, you do the budget, where are my profits?

Nath: You get nothing. I refer you to the contract you signed or maybe I signed for you, which clearly states you owe me a tenner.

It would be a sketch show, but instead of Nath impersonating celebrities, we’d just have the real guest stars – Tom Jones, Robert De Niro, Christopher Walken. The Groovematic 3000 wouldn’t be played by Jon, it would be an actual robot. And they’d probably replace us with Josh Widdicombe and that guy off The Inbetweeners. And get some new writers. And get our names wrong. 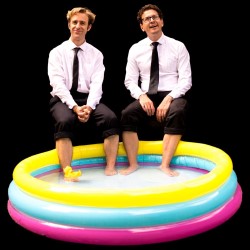