Graham Dickson is The Narcissist is described as a meta-theatrical mind-fuck of a character show about an egomaniac called Graham Dickson. We fired over a Q&A to get more info.

Hi Graham, tell me about your show.

The show charts the efforts of an egocentric actor and his well-meaning director as they attempt to adapt ‘The Narcissist’ – a collection of short stories by a legendary Russian author who may or may not exist. It all gets very meta and very silly quickly.

I’m inspired by my peers. They are too numerous to mention. It’s important to be inspired by people who are close to you. Then they are easier to sabotage when they become too good.

I played a crow in a primary school adaptation of Dumbo once. That was pretty bad. I’m pretty sure it was racist. At least I was actually enrolled at the school at the time, it wasn’t recent. That would have been significantly worse.

I guess the really annoying guy in the office who does lots of impressions. It’s awful to think about. Please don’t make me think about it.

A book called Swallowing Mercury by Wioletta Greg. It was a very pleasant read.

Great question (jumps out of window).

It would be a gameshow where contestants would pitch the most outlandish and obscene ideas for primetime TV shows. At the end of each show, I would deem the competition aspect of the show void and give every contestant a million pounds of the BBC’s money to make their sinister creations. That would show the BBC for trusting me… 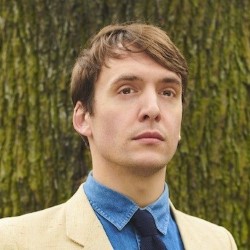