Kerry Godliman is stand-up, writer and actor, currently starring alongside Ricky Gervais in Derek on Channel 4. She back in Edinburgh with Face Time.

“My Edinburgh Fringe show is about how we communicate in real life and on line. It’s about stress, rowing, washing machines, fashion, consumerism… all that’s in there somewhere. And some other stuff.”

Are there any similarities between the character you play in ‘Derek’ – Hannah, and the real you?

“We’ve got the same face and hair. But Hannah‘s more patient than me and less judgmental. I wish I was more like her.”

Is it true that they’ll be a second series of your popular Radio 4 show, Kerry’s List?

Do you prefer, stand-up, acting, writing or something else entirely?

“I love doing all of them. I get bored if I just do one thing. They all sort of flow into each other in the end, they’re all about storytelling and different ways of expressing feelings.”

“Roisin Conaty, Zoe Lyons, Jen Brister, Amy Schumer, Bridget Christie, Katherine Ryan… let’s get this made, it would be brilliant!” 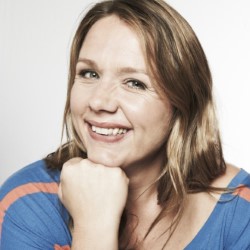