Tell me about The Greatest Magic Show – Answered by Justin Williams, Director

Our main mission with ‘The Greatest Magic Show’ was to create a family magic show unlike any other that was currently out there in terms of the uniqueness of the routines, comedy, magic, and the pure scale of the show and production.

The Ringmaster (played by Magnus Danger Magnus) commences the show with a story told through song in which he explains he has travelled far and wide to find The Greatest Magic Show but after being unable to, he decided to make his own instead! A rollercoaster ride of spell-bounding magic involving the two magicians, as well as the ringmaster himself, sees all sorts of craziness ensue including incredible Vegas-style illusions, giant pairs of underpants on faces, a child from the audience being transformed into a magician themselves, and an inspiring finale in which we encourage all the kids (and big kids) in the audience to pursue whatever they want in life no matter how weird or different their dreams may be.

My favourite part of the show is undoubtedly the finale, in which both Sam, Magnus and I are able to break the fourth wall and talk directly to everyone in the audience about the importance of believing in yourself, never giving up and following your dreams – all the while performing mesmerizing pieces of magic which have the whole audience on the edge of their seats! These are scripted words which would have inspired me so incredibly much had I heard them as a child, so I hope to inspire even just one child every show we perform.

Tell me about the Adults Only Magic Show – Answered by Sam Hume, Producer

The Adults Only Magic Show is essentially exactly as it sounds – an incredibly impressive magic show with adults only humour at every twist and turn! We had found great stride with our family show, and we wanted to also capture the late-night fringe market where we could have no limits in how far we wanted to take the magic in the show – which is exactly what this production has given us the foundation to do!

We have taken the very best effects in the business and compiled them all into this 65-minute performance where everything is combined with 18+ humour and whit throughout all of the routines. Both our favourite magicians growing up were Penn & Teller, and this show shares the same style of Adults Only humour as displayed by the world-famous duo. We have the very best of mentalism, close-up magic, illusions, and an extremely dangerous routine in which both Justin and I both race to escape; with the loser quite literally having to ‘reveal all’!!!

My favourite part of the adults show has always been our second last piece of magic that we perform in which – without giving too much away – both Justin and I get to perform our version of a sexy strip which finales with us ripping off our press stud jeans at the drop of a famous Britney Spears song, revealing an IMPOSSIBLE prediction underneath. I always love embracing my inner dancer and is always highly commented by the audience afterwards as being the biggest WOW moment in the show.

Who is the Ringmaster?

Our Ringmaster for the upcoming season of The Greatest Magic Show! is a globally renowned performer from Western Australia – Magnus Danger Magnus (yes that is his legal name!) – who has travelled the world his entire life performing as a Ringmaster in numerous circuses and sideshow productions! He is a master MC who lends himself to hosting and voiceover duties with everything from radio stations to Comic Con in the states! He was recently selected by the Make a Wish Foundation in Australia to don the persona of Willy Wonka and took a terminally ill child on a tour of his self-made chocolate factory (Magnus is also a scientist who can make real magic happen with the right chemicals) and backstage at Crown Casino, Perth where the musical ‘Charlie and the Chocolate Factory’ was mid-way through its Australian tour.

When on the stage, his powerful singing voice, charisma, slapstick and character work truly shine through – he is what can only be described as a real-life Disney character!

You’re massive in Australia, selling out in Adelaide, Perth, and Melbourne. How long have you been performing together? Thinking about your adults only show, have you ever gone too far? – Answered by Justin Williams, Director

So we first met back in 2012 when Sam was actually competing at the Australian Junior Championships of Magic and I had gone along to watch the competition! After the competition (which Sam won!) I introduced myself to him and we got chatting, where a creative spark became immediately apparent. Fast forward to 2014 we were debuting our first family show called ‘Go Trick Yourself’ and we continued reworking our family show for several more years, before making the decision in 2018 to design two brand new shows – a family show and an 18+ adults only show – called The Greatest Magic Show and Adults Only Magic Show respectively. Capturing both ends of the market at global fringe festivals proved massively successful for us, and the shows have continued to grow and develop each and every year that we tour them around Australia and the world.

In terms of whether anything has ever gone too far in our adults only show, the most memorable moments for us have always come in the form of our ever so slightly inebriated audience members that we get up on stage to help out with the routines in the show. We have had someone get so involved with a strip tease that they threw a shoe into the audience, another gentlemen who got a little bit too excited by the prospect of putting me into the straight jacket to the point Justin was being spanked by one of the leather straps of the jacket while on the floor (all the while Sam was unable to help as he was completely restrained in a chair at this point!), and a female volunteer who managed to steal a kiss from both of us as she was leaving the stage! Then again, all our volunteers receive a free drink card for coming onto the stage, and being a late night fringe show we really aren’t all that surprised by anything!

What’s next after Edinburgh?

Immediately after Edinburgh we are planning a little week getaway somewhere around Europe (top contender at the moment is Croatia!) for a little holiday / R&R session! Then we head back to Australia to tour our other family show called ‘CIRCUS – The Show’ around Australia across the summer there, before starting the Fringe Circuit again in 2023 travelling to Perth, Adelaide, Melbourne, Brighton UK, and potentially even over to Prague and Paris before once again returning to Edinburgh.

We are also always designing and bringing to life new routines and characters with new shows always in the works – our current shows continue to evolve every single season that we do! Besides some big changes for instance the addition of the Ringmaster character into The Greatest Magic Show, we are always changing up routines in the show to keep it fresh and new for audiences particularly when we return to the same cities every year. We are always reinvesting the majority of what the show makes straight back into it, so production value, lighting design, setts, quality of props and illusions etc. are forever growing in quality and size and will always continue to do so! Not to mention creative sparks are often unwavering in frequency particularly when constantly surrounded by such amazing artists such as at Edinburgh Fringe, and with inspiration being constant  in our lives so to are new routines in both our shows.

We also have dreams to one day have a theatre tour of one or all our shows across Europe, which we are currently working towards after Edinburgh. 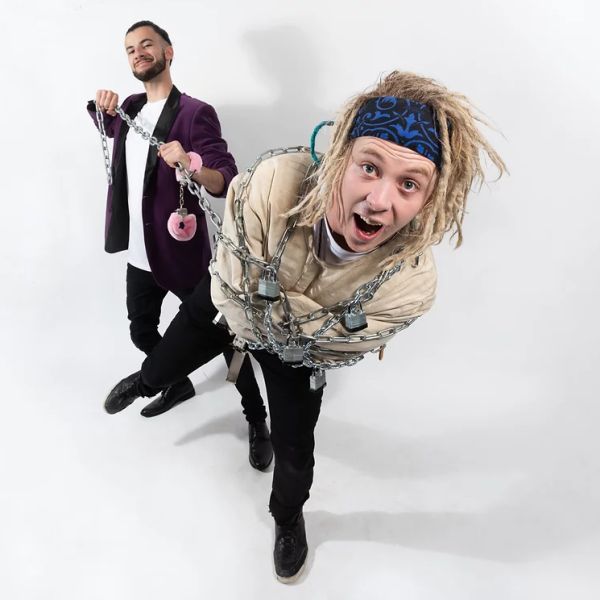