Lloyd Langford is longing for simpler times. His new Edinburgh show finds him jesting about the new-fangled technologies that purport to make our lives easier, but quite often end up making things even more complicated.

“The show is called Old Fashioned, and it’s an hour of jokes, invective, anecdotes and observations about how shit the modern world is. I’ve just watched the stage version of Wolf Hall, and it’s making me long for a time when the decapitation of a royal was a semi-regular occurrence.”

How long have you been performing?

“I started in 2001, at university, largely inspired by seeing a 30 second clip of Daniel Kitson on the television and being at a gig that featured Francesca Martinez and Chris Addison. There wasn’t very much stand up on TV then. It felt a bit more underground, a bit more edgy. Like a Womble with a drug habit.”

You’ve written and appeared on numerous TV and radio shows. Do you prefer TV, radio or live work?

“I like to mix things up. I consider myself lucky that I’m able to do all three. I really enjoy doing The Rhod Gilbert show on BBC Wales as there’s an excitement and immediacy to live radio that combines the in-the-moment nature of stand up with the collaborative element of television panel shows.”

“Like a curious panther, stalking then repeatedly nipping you on the funny bone.”

“Good question. In no particular order, Bobby Mair, Andy Zaltzman, Hannibal Buress, Bridget Christie, Harry Hill and Coconut Lady. That’s quite a wide variety of styles, both comedically and in terms of hair.” 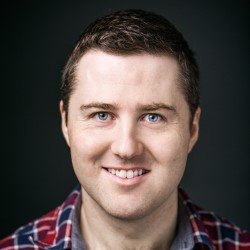