Tired of being a penniless comedian Paul F Taylor has taken drastic action to turn himself into a humourless money motivated workhorse. However, as Martin Walker discovers, underneath the facade a monster lies in wait…

“Part of me wants to say my Edinburgh show is a story about how we grapple with our choice of direction in life, and how we shouldn’t give up on your dreams. But really it’s an hour of my trademark leftfield stand-up comedy where I liken my stand up persona to being an uncontrollable force like the Incredible Hulk.”

And you’re involved in a second Fringe Show?

“It’s Short & Curley – a whodunit. I see it as our utterly shambolic but joyous version of the film Clue. You can expect some over the top characters, ludicrous sketches and the chance to solve a great mystery. It’s a show that the brilliant Rebecca Shorrocks – Short and myself – Curly, have put together over the past year comprising of our favourite sketches we have performed at the sketch comedy night Cabarera throughout the year.”

How do you describe your style comedy?

“You mean if someone had to describe my comedy to the police after it ‘did them in’? Well, I would say ‘blah blah joke blah blah joke joke’, but that’s a terrible description, so I’ll go with ‘Quirky Offbeat One Liners Coupled With Surreal Flights Of Fancy’. The main thing to remember when describing my comedy is to make sure you use lots of words.”

You’ve performed throughout the UK, Europe and USA. How do the audiences differ?

If you were curating a stand up show for television, who would be on the bill?

“Only dead comedians. So I’d have to dig up then rebury Mitch Hedberg, Richard Pyor and George Carlin in an ancient Indian burial ground. Then they’d reanimate for the gig. I’d also love to resurrect Eddie Izzard. He’s dead right? After those marathons? No?… Well Eddie Izzard for sure! If he’s not dead maybe he could work up a routine on what it must be like to be a zombie or something?” 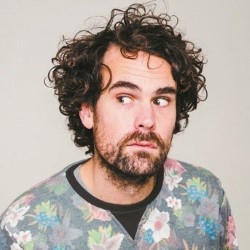