Show: Growing Up Ringside: A One-Woman Show by Mina Liccione

Tell me about your 2022 On-Demand Edinburgh Festival Fringe show

Growing Up Ringside is about love and resilience told through a mixed-cultural lens. I don’t hold back any punches as I share untold stories about my New York upbringing as the daughter of an Italian-American boxing promoter. From wise guys to Mohammed Ali, broken bones to mended Broadway dreams all the way to present day in Dubai where I pioneered a comedy scene while adjusting to a whole new Arabian, Muslim world. It’s both hilarious and heartfelt and combines comedy, rhythm, multimedia and projections.  We filmed it live in Dubai at the Digital Theatre. The 360-degree projections are so immersive you feel like you’re stepping into these different worlds and scenes in Manhattan, San Francisco, Dubai. You can smell the marinara sauce simmering, feel the New York buzz, taste the wedding cake! It’s such a trip!

The Edinburgh Fringe Festival is the biggest performing arts festival there is! As an American living in Dubai I can say that we love everything to be “the biggest and the best” so it only makes sense! I’m excited to be sharing these unique stories from New York and the Middle East on a global platform and connect with a larger audience and community of artists.

Muhammed Ali has inspired me since I was a kid. He used his fame to help others and always stayed true to who he was and what he believed in. Williams, Billy Crystal and John Leguizamo’s work deeply inspired me to create a one-woman show. Their storytelling, characters, energy and honesty made me say “I need to do that!”

Are there other shows you want to check out?

The pandemic has changed a lot of us. I’ve gone from “go big or go home” to stay big and stay home. One positive from all of it is that we’re now able to stream and watch shows from around the world! I’m excited to be part of this year’s Edinburgh Fringe On-Demand Platform and will be watching loads of stand-up with Next Up Comedy Shows with my husband and the show ROB by Teatre de l’Abast with my young twin sons.

If you were a pasta, which type would you be?

Fussili because it matches my hair and sense of humour.

What’s your advice for up and coming comedians?

Stay humble, be kind to other comedians, keep writing and go see other artists’ shows! 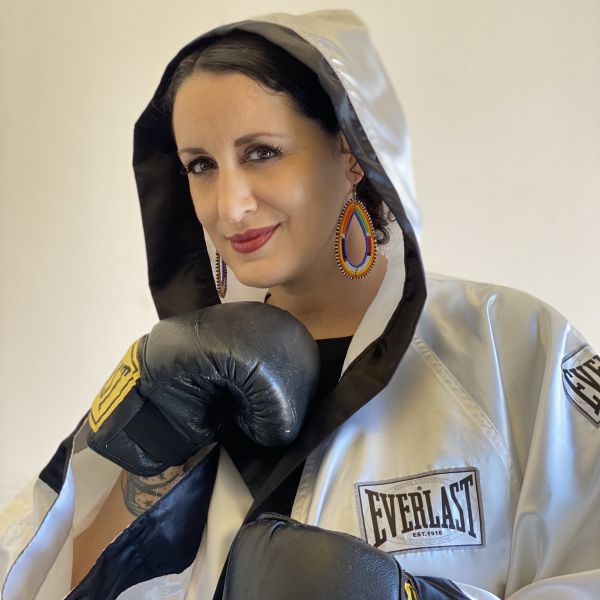