I don’t know about you, but I had a weird 2020, what with the old global pandemic. £15k of work in the diary went overnight, and I was basically unemployed. My sister had two kids under 5s at home, and her and her husband both had serious jobs, so I ended up being their live in nanny for 6 months, sleeping on the sofa and doing childcare.

And at the same time I was processing some trauma from my childhood. I don’t want to get too heavy but when I was 13 I was groomed by a paedophile and I didn’t work it out until a few years ago. I’m not a fan of using misery to sell comedy and yet I’ve ended up writing a show about just that thing. Though the horrific bits are getting smaller and the rest of the show funnier til it’s just 10 minutes of slams against Prince Andrew.

I love Edinburgh the city, both during the Fringe and the rest of the year. Its got about 6 of my all time favourite pubs, 2 of my favourite cocktail bars, and its such a cool, interesting city. I also like how much of a bubble it is. You can be having a meltdown over your show or a review or a bit of comedian drama and you can walk 25 minutes in any direction and sit in a lovely cafe and no one cares about what you’re doing.

The Fringe is my favourite time of year. I see mates I don’t get to see enough, I see shows that inspire me, there’s weird little gigs that you and 6 other people experience one very odd moment in life and its never replicated again and then you all come out blinking into the sunshine (or the hail, as its summer in scotland).

The Fringe is basically like the world cup for comedians. I absolutely adore the cut and thrust of circuit gigs but stretching out and telling a big story or doing bits you only get to work in an hour is such a privilege.

I was gonna go for cheap points and say “the brave workers of the NHS” then I remembered my friend Nadia Kamil quit comedy, retrained as an NHS Doctor and qualified during covid. And then she still pops up every so often with a hilarious sketch or in a podcast (she’s in Beef and Dairy Network) and is still really funny. That’s inspiring.

Also, any British sportsman doing well. I’ll watch anything (except golf) if there’s a Brit with a medal hope. I watched Tom Pidcock attack Alpe De Huez in the Tour De France thr other day and it was dead inspiring. Not enough to actually get me to ride a bike, but you know, in abstract.

Rob Kemp is always worth a watch and I’ve heard his new show Agenda is great. I always like to check out work by mates whose paths don’t cross because we’re far away like Liam Withnail, who is way overdue a big break. Jess Fostekew I am seeing the day before my show starts because we clash, and I always like to book into go see a thoroughly depressing play just so I can say I got culture and go back to watching my mates be funny.

But Paul, you can’t just be an incredible comedian, a surprisingly good actor, and generous, sensitive lover. Surely you didn’t also do something impressive like write, illustrate and publish a book during lockdown?

Guilty! I did a book of comics “but Doctor, I am a collection of comics by Paul Savage”, which is 111 funny daft jokes. It’s available through my website savagecomic.com and I give them away at the end of my show if you put enough donation money in the bucket or if you are affected by the jokes and I feel bad. 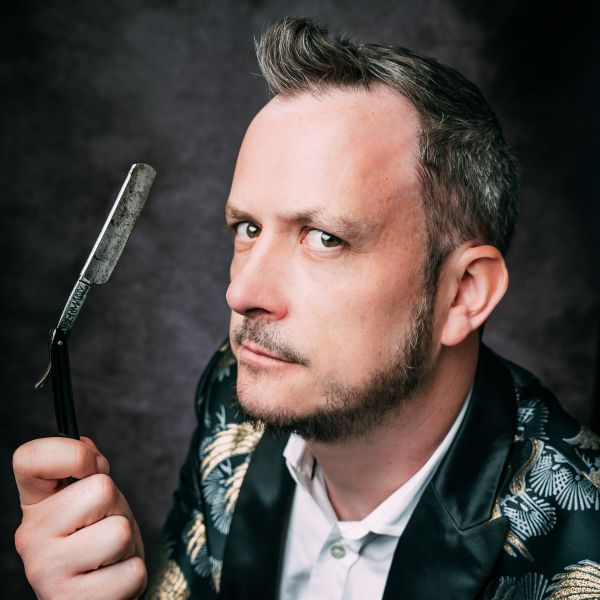