Improv Cage Match is a show with two improv teams, and the audience picks the winner, basically. Last year we had amazing teams like Baby Wants Candy, The Free Association, and Degrees of Error. It’s almost like a compilation show, but it’s improv. And we have a big countdown clock.

I’m afraid I can’t, it’s classified! You need to undergo a thorough vetting procedure before I can even tell you the venue!

Usually in our improv team, everyone sort of huddles around and we say “got your back” to each other. Then we carve each other’s names into our backs. It’s quite time consuming so we usually meet an hour before each show.

To my knowledge I have not been reviewed, and I’d like to keep it that way for as long as possible. Though I do remember at the back of one of my gigs, an older gentleman was VERY INTENTLY examining a London A to Z map, so there’s probably a review implicit in that.

I only listen to reviews (other people’s as I don’t have any). So I find someone with a mellifluous voice and they read them out as I eat breakfast cereal in a recliner I inherited from a relative.

He committed an offence against comedy, because that shit’s not funny. A lot of wannabe standups attempt shock humour, because gasps easier to get from a crowd than genuine laughs.

No, because if you add comedy to anything by definition it will be funny. The trick is to make sure you’re doing comedy and not a history lesson or a TED Talk.

You gotta know where the line is. I have to stay in constant contact with the line (for personal reasons) so I have to repeatedly cross the line and retreat back during all performances.

Doing my first paid gig because I got to MAKE IT RAIN (it was an outdoor gig for Wiccans and we all did a rain chant). 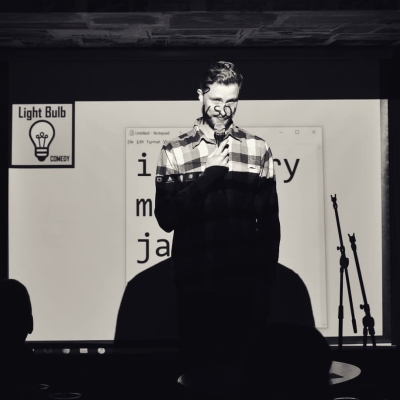