It’s a distillation of the full show which we started in 2019 but which got strangely interrupted by a naughty wee virus… As always, it’s a mix of old and new.  I always grumble at having to do the old stuff, but then someone points out how utterly distressed, nay, GUTTED, I’d have been if the Quo hadn’t sung “Whatever You Want” when I saw them last, and I realise that we have to do the hits.  Well, what passes for “hits” in the arcane world of cabaret, haha. As usual, we tackle all the great comedy subjects – fake news, food insecurity, the menopause, online bullying, apathy in the face of increasingly authoritarian governments, sex in cars etc.  In spite of our best efforts, people still laugh like drains at these enormities, hence we are still working.

How has Fascinating Aïda changed since you founded the group in 1983?

In the beginning, we were three giddy girls with a few things going for us – a flair for a funny song, a bit of comic timing, a love of harmony singing and an array of sparkly frocks.  Although we worked hard to do as good a show as possible, we always had our eyes on a better job elsewhere – Fascinating Aïda was only ever meant to be a temporary job because we all thought we were going to be doing Chekhov shortly.  Ha!  However, I (the “I” in question being Dillie Keane who is answering these questions!) always thought Fascinating Aïda had the legs to last for a few years anyhow.  When Liza joined the group, it gradually became evident that we had some stability as a threesome and we are better at planning ahead.  I don’t just mean planning gigs, I mean planning the material.  We write very differently nowadays.  Rather than waiting for a comic idea to strike, we decide on a subject and research, talk, walk round the subject until we can see a way in.  It’s a much more serious approach.

You’ve clocked up over 27 million views on YouTube and counting… which equates to more the entire population of Australia. Are you fans of the internet? Which one of you is the greater technophobe?

I have always adored technology.  I’m fairly sure we were the first act on the circuit to have a website, we had a web diary long before the word “blog” entered the lexicon, and I’m also fairly sure we’re the first theatre act to offer a free, online, fully downloadable programme (thus saving trees!).  I just wish I was good/young enough to become a hacker, I’d love to explore the dark web and hack into Russian banks and filch all their moolah.  That would be very satisfying.  I’d say that Liza is very comfortable with everyday technology, she was slow to join social media, but now she has her own solo career, she’s embraced it with open arms.  Adèle isn’t so much a technophobe as a technosloth.  She does what’s necessary, and she posts a lot of pictures of abstract statues and carved cornices on Instagram and Facebook, but not much more than that.  Well, she has a PC, not an Apple.  I despair.  Meanwhile, Michael Roulston, who joined us on piano in 2019, is a whizz at many apps and is always finding new and clever things to do technologically speaking.

I think Cheap Flights is one of the best comedy songs ever performed, but which ditty is your favourite?

Thank you, that’s very kind.  Can I meanwhile ask you NOT to refer to our songs as “ditties”.  It’s a horribly pejorative word.  Cheap Flights actually took a couple of months to finish, most of our songs take at least a week to write, and we take huge care with the construction and shape of the song.  “Ditty” makes it sound like the song your neighbour’s uncle wrote about the day his ladder broke.  Having got that off my chest, the song I love most is called Old Home, and it’s not funny at all.  It’s about the sadness of leaving somewhere you’ve been happy and called home.  I started it when I was moving out of the first little house I owned;  I sat weeping at the piano, surrounded by packing cases, and working out the tune.  Self-pity isn’t usually such a useful inspiration.

You mentioned that you have a relatively new recruit in pianist Michael Roulston. He’s no stranger to Fringe audiences, having performed with Jess Robinson, Dusty Limits and others. How did you hook up with Michael? Are you nice to him on stage?

We are ADORABLE to him both on and off stage.  He is very partial to a frangipane, and we are constantly SHOWERING him with cake.  He’s very much in demand as he’s so bloody brilliant, so the cake thing is very necessary to keep him onside.  I saw him years ago playing for Shoo Shoo Baby and thought, goodness me, that lad’s got all the chops.  I kept my eye on him and then we hooked up for my solo show.  We’ve worked together for some years now, and it seemed a logical step for us to co-opt him into Fascinating Aïda.  He brings SO much to the party – he plays like an angel, has complete mastery of a huge range of styles, and he’s a mensch into the bargain.  Now of course, other acts will start tempting him with almond buns and such like, but I do believe our baked goods are superior to all others.  Failing that, I have a powerful right hook for an old girl, so I advise all comers to lay off with trying to tempt him away.

Now I must end this interview as I have to go for boxing training. 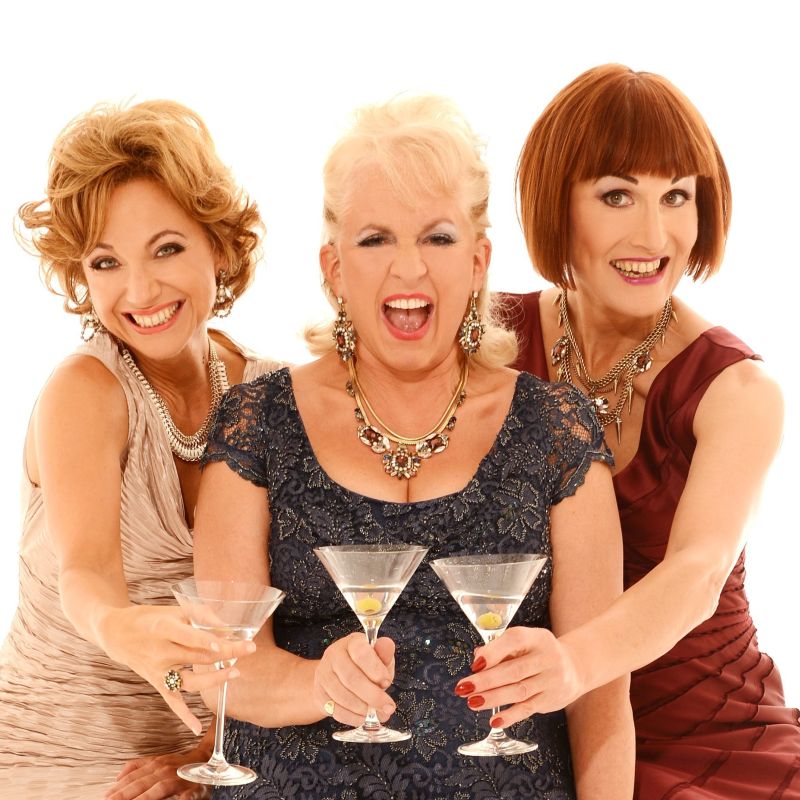