“I’m now thirty, so it was time to write a show about grown up things, so it’s about why Dunston Checks In is the epicentre for all emotion in my generation. It’s also about spiders and catchphrases and volcanoes and lebkuchen and theme parks, Sister, Sister and 9/11 and Princess Diana. And it has the single best joke about Billy Joel you’ll ever hear. If I remember to say it, because technically it doesn’t fit into the show. Oh man, it’s soooo good. Like imagine a joke about Billy Joel, in fact, don’t, it’s a waste of your time. Just trust me.”

“I’ve done it for three years, really love the set up and how it runs and knew they had a room that I really wanted to perform my show in this year. I’m in that room, at a time slot I wanted and I haven’t had to put up a big chunk of change for it. That’s great. I think audiences tend to really enjoy good free shows as well, they feel like they’ve uncovered a little secret and are really happy to recommend free shows to other people. Also, the paid venues insist on no Billy Joel jokes because they think they’ve heard all of them. Little do they know.”

“Well my Broadway Baby review last year suggested I was a natural comedian, which is a great start to a review, I can’t wait to read the rest… Then it went on to suggest that I was an amiable Aussie, which surprised me as I have an English accent and there were references to me being English in the show. Then it went on to suggest that the reviewer wishes he had died rather than watch my show. So. What can we glean from that? And how do we translate that into a description for someone who hasn’t seen me? Stuart Laws is a natural comedian but unnaturally English and so bad that people wish they were dead rather than watch me, a natural comedian, perform on stage.

“If I was being more positive I would say: friendly, observational but with a surreal style and unusual perspective on Billy Joel.”

“I juggled chairs on stage once, I also juggled a large wind fan and a stool. I can’t juggle but the juggling God worked through me those days. Or when I almost got punched by a drunk heckler who was wearing double denim because I suggested he got fashion tips from B*Witched and that he could always Blame It On The Weatherman.

“… Or when I built a human pyramid with the audience and clambered to the top. Or the first time I performed my Billy Joel joke on stage. Oh my word, it was incredible.”

I’m a big fan of Tommy Jumpers and Joel Billy, open-mic acts that I think are gonna go big this year. Probably get Joff Canute to MC because I saw him work the comedy tent at Green Man in 2010 and it was incredible. Also: Billy Joel, just to see his face when I don’t do the joke. Though I probably wouldn’t book myself, I’d worry that people would think of it as nepotism. 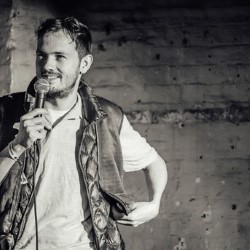