This Edinburgh Festival Fringe you can enjoy a brand new energetically witty and charming family show from Patrick Monahan. Martin Walker chats to everybody’s favourite Irish/Iranian about the show, Adventures in Monahan Land.

“It’s a brand new hour of stand-up including a mixture of stories, routines, dancing and hugging. I hug every year but this time they’re special 2014 hugs, hugs that have been developed over a decade of hugging.

“And as it’s my 10th solo show at the Edinburgh Festival I will be giving one lucky person each night 10 hugs during and after the show.”

You’ve done loads of TV work. Which do you prefer, TV shows or a live crowd?

“Both are great fun, but you can’t beat a live crowd, with a live crowd you can over run, do a bit longer if people don’t mind missing the last bus home and sometimes join you on stage for a dance and a hug during the show. Whereas with a TV show it’s much more rigid and slicker, they don’t have clearance or health and safety and the time for you to dance, hug and crowd surf people while doing your stand-up routine.

“But I would love to do a new kind of comedy dancing show on TV, maybe something where comics and comedy fans get to learn dances while the comics do stand-up routines. I’d have it hosted by Paul O’Grady.”

I love to follow your tweets and your vines. How important is social media to you in getting your message across?

“I love communicating with people all the time, I used to just chat to random strangers on the buses and trains every day but you can only get banned from so much people transport before you need to look for other channels of communication to speak to people and social media like Twitter is perfect. Not only can I tell people what I’m up to and which town I’m in, they can also tweet you back to let you know if they’re in the town or what to look out for. It’s amazing, the other day I tweeted I was doing a show in Egypt and people tweeted me a picture of camels to have a look out for and to ride on.”

You always seem to be running marathons or doing work for charity.

“I never thought in me life that I would run a half marathon never mind a full one. Now I have run the London marathon and the great north run – half marathon – a few times and hoping to do a few more. It’s actually great fun even though it sounds horrific, the first twenty three miles are painful but the last 3 miles are a right buzz.

“As a comic our job is to bring happiness and fun into people’s lives, so it’s the best job in the world for me to do, and supporting local and national charities is something that goes hand in hand with that. Why only restrict yourself to entertaining and performing to people on an evening after they’ve finished a days work, when you can get about to local hospices and hospitals and centres where people are during the day. We should all do it, it should be part of all our working weeks.

“Zoe’s Place baby hospice, Odyessy cancer charity, and Red Dreams are just some of the many amazing and life changing charities out there that need support.”

“I’ve always loved and admired Robin Williams from America, his energy, his manic humour and his warmth that can fill any room, he would definitely be my first guest on. And then I’d get a time machine and bring back from the past Dave Allen and Richard Pryor to top and tail the show. And to mix the show up with a bit of variety I’d stick on Lionel Ritchie and Celine Deon on the bill.

“I can’t wait, let’s get the studio booked, I’m ready to film this!” 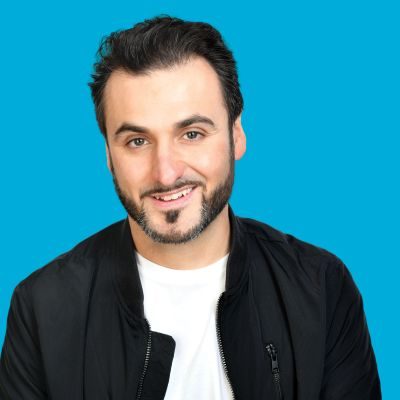