Rhapsodes is billed as a ground-breaking, unique improvised Shakespeare show, inspired by the bardic competitions of the ancient Athenian festivals. We fired a Q&A off to its co-star and co-creator of Showstopper! The Improvised Musical , Sean McCann.

Me and Adam Megiddo will create an authentically Shakespearean masterpiece on the spot out of audience suggestions. We are also competing against each other for the audience’s favour. Only one of us will be crowned ‘rhapsode’ at the end of each show. It’s the Jimi Hendrix experience of improvised theatre, except there are only two of us, and we are both in our late forties.

August is a state of mind.

Spike Milligan. He was many things, one of them being the most revolutionary comedic force in Britain in the 20th century. I sense folk are still struggling to catch up with what he unleashed. He was doing outrageous, improvised theatre in the west end (“Son of Oblomov” – look it up ) decades before anyone else was even trying.

Worst – receiving the news of the Brexit vote in the wings of a Canadian improvisation festival , and then having to play “improvised dungeons and dragons “ in a state of shock. To cheer us up, the director put Adam Meggido and I in a fight with “Brexit the Barbarian”, and allowed us to beat the living daylights out of him.

My first ever review in The Stage in 1998, began “Sean McCann is a very strange man”. I guess that’s best and worst.

A deeply bitter teacher who inspires through the ferocity of their regret. Although I do try to be that anyway.

“Five Came Back” by Mark Harris – a history of the Hollywood directors who saw active service in world war two, rather than learning about it from movies. Best book about the movies I’ve read since Lee Server’s biography of Robert Mitchum. Try feeling like you deserve sympathy as a suffering artist after reading this.

How many improvisers does it take to change a lightbulb?

Edinburgh Knights: A harrowing montage of lengthy close – ups of every performer in Edinburgh, just after returning home late at night from wherever they have been carousing, staring at themselves in the mirror, considering their own life – choices, dressed up as a knight from Arthurian legend. Best costume wins an all – expenses paid, full run of whatever show they are in, at the Pleasance Grand in 2018. Presented by Charlie Brooker and Derevo. 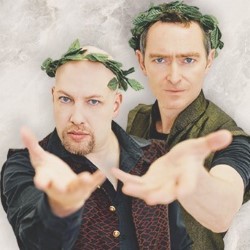