The Cat Man Curse is a surreal comedy that tells the story of a washed out 70s Hollywood actor and his whirlwind encounter with a mysterious curse. We talk to the cast, Sam Grabiner, Jordan Mitchell and Guy Emanuel (collectively known as Pelican)

Hi guys, tell me about The Cat Man Curse

It’s a narrative show that blends different styles of comedy: part sketch, part character comedy, part noir detective mystery. It’s quite playful and physical. We try to make the audience feel involved and included in the action as much as possible, and it’s got quite a colourful 70’s aesthetic (full of homemade props, costumes and music).

Edinburgh is an opportunity to learn loads about your show by putting it in front of a discerning audience for a month. It’s a place where a show can develop, more than any other festival. It’s also a hotbed of great shows, so it’s a really good place to watch others and get inspired.

A big mix of people. A lot of them we’ve seen at the fringe over the years: Trygve Wakenshaw & Barnie Duncan (they inspired us towards making playful, semi-improvised, energetic shows), along with companies like Elephant Room, SpyMonkey and The Pretend Men (who made us want to make crafted, visually interesting slightly more narrative orientated things). Hopefully those influences can be reconciled – we’ll see!

We did a late show to quite a drunk crowd who refused to watch the next sketch unless we got naked. They began chanting ‘take your top off’ and ‘get your nob out’. We looked over to our producer for support and he was joining in the chant. That was probably our best and worst experience.

We got a 2 star review for a play we did from someone who complained “there wasn’t a single dick joke”. Which was true, but we never promised there would be. It was a play about a family dealing with loss.

We can’t remember the last book we read as a three. We used to do that more often.

Take your top off!

Please stop asking that, we’re trying to do a sketch.

Keeping Up With The Kardashians, and it would feature the Dalai Lama being told about the latest antics of the Kardashian family, and saying things like “who are you talking about?” and “why are you telling me this?” 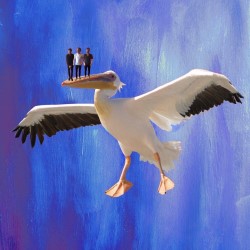