According to his website there are two important facts about Rob Coleman. Firstly, he writes beautifully crafted gags, stories and rants that increasingly come from his ever bleaker persona. Secondly, and more importantly, he possesses one of the finest heads of hair on the stand-up circuit. Martin Walker finds out about Rob’s Edinburgh Festival Fringe offering.

“My show is called How Not To Pedal An Ocean. I believe it’s the first ever Edinburgh show about ocean rowing and pedalling. I really want to pedal across the Atlantic, although I would also row it if someone gave me the opportunity. The only trouble is that for reasons such as incompetence, cowardice and constipation, my two previous attempts haven’t gone terribly well.

“How Not To Pedal An Ocean addresses the conflicts inherent in being a wannabe adventurer who isn’t very good at it. As much as I’d love to be battling the elements and embracing nature, I’m clearly not cut out for crossing an ocean in a small boat. The show takes a look at how – and more importantly why – I got started, how I came to fail, twice, and why, despite everything, I still want to have another crack at the crossing.

“It’s an hour that willingly embraces failure, but is also a tribute to the enthusiastic amateur and the possibility of hope triumphing over all logic.

“There are plenty of visuals demonstrating both the rigours of the undertaking and my inadequacies, and an opportunity for the audience to get a taste of life on the ocean wave.

“If you’ve ever had a desire to bond with the great outdoors, but are worried you might find yourself all at sea, this is the show to make you feel better about yourself.”

“I’ve worked with Laughing Horse for a number of years, both here and at the Brighton Fringe. They are an extremely professional organisation and very easy to work with.

“Everything is laid on, the rooms are nice and the PA kit works! Plus they send out details of marketing opportunities and excellent advice on flyering, designing posters etc.

“And of course it’s relatively inexpensive.”

“I spent a long time working behind the scenes. I tour managed bands, promoted music and comedy nights, reviewed events etc. Eventually, I decided that wasn’t enough and I wanted to be on stage.

“I couldn’t play an instrument or sing, so comedy it was.”

“Best: It was one of those nights where every word is alchemised into comedy gold. As I was leaving the venue, the audience formed a guard of honour and applauded me.

“Worst: I was at a gig and dying horribly. The stage was against a wall with a door either side of it leading into a corridor which took you to the loos. A bloke needed a pee, so he went out of the one doors. Five seconds later, despite still needing the pee, he took the time to open the other door and shout out ‘You’re shit’ before proceeding to the gents.”

“I’ve seen loads of fabulous comics, most of whom don’t get enough exposure. As a result, I’ve gone for names that might not be so well known, but have always brought the house down. 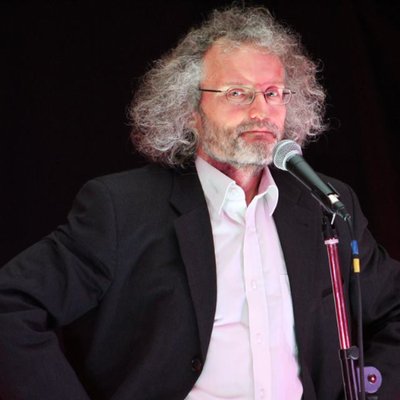