Lynn Ruth Miller is 80 years old. A decade ago she discharged herself from hospital after being given two weeks to live, and started a career in stand-up comedy. Martin Walker talks to our favourite granny gone wild.

Tell us about your show Not Dead Yet.

“Well, I guide us through eight decades of triumphs and failures, wit and wisdom and the recipes. Things that have kept me going. I throw in some brand new original songs too.

“The exciting thing for me is that Sarah Louise Young is directing this and she and Michael Roulston are creating the songs. I admire their work immensely and heretofore have always worked alone doing all my own organizing and writing. This time I have the best help I can imagine with two of the most talented people ever. This project has been a bit of a journey because looking back on this long life of mine I see so many detours I could have avoided. The key line in the script says it all: The funny thing about being 80 is that events that seemed earth shaking at the time become mere footnotes in the bigger picture.

“Creating this show has been an education for me as well as an intensely personal and creative experience.”

Tell us about your show, Granny’s Gone Wild.

“It’s a compilation of Bill Smith’s favourite songs and comedy that I have done over the years plus two songs he wrote to augment the show. It won the 2013 TO&ST Award (Time Out and Soho Theatre) and has gone through several changes as it has developed. At the Soho Theatre, we had Robert Pettigrew at the piano and added two extra songs that he wrote in addition to The Mirror Song, which is the pivotal song in the piece. In Edinburgh, sadly our budget will not allow a live pianist so we will once more use backing tracks. We felt that although it won recognition many people have not seen it and it is a joyous affirmation of life that I want to share with everyone.”

You’re performing both shows at the Edinburgh Fringe.

“I usually do two shows. I like performing and Edinburgh gives me a chance to tell stories and sing songs in ways I cannot do in “real life” outside of the intensity of a month long fringe event. The more shows I perform, the younger I feel and the more in touch I am with the world I am living in.”

How did you get started in Cabaret?

“It was a total accident. I was doing comedy at a red-necked blue-collar bar in Pacifica and a guitarist asked me if I would like to add some music to my act. I had been singing Johnny Mercer’s The Strip Polka for decades so I said “Yes That might be fun.” One song led to another and one parody to another and before I knew it I had created ‘Aging Is Amazing’ (Star of Brighton Award in 2009) and everything grew from that beginning. Besides it is great fun to sing… especially when you cannot carry a tune.”

What’s the difference between US and English/Scottish audiences?

“The United States audience is very, very ageist and sexist. Old women are not top of their list. However it is the bookers far more than the audiences themselves who both ignore and reject me. I am much more of a shock to them than I am to English/Scottish audiences. American audiences think that people my age should be watching their grandchildren or taking bus tours and playing Bingo. There is a bit of that here, but not as overwhelming. To be fair, there is a huge segment of the American population – especially women of all ages – that love to see an old woman who has done nothing to conceal her age having such a good time with her life.

“Also, British audiences take better to stories as opposed to the one-liners I always use for American audiences. That gives me more of an opportunity to develop the theme of all my performances: ‘Go after your dream and live your life. Listen to your heart. It will tell you who you really are.’

“My material deals with a universal fear: we all are petrified of the decline we think might happen to us as we age. I am showing you it is a choice – within some physical limitations. That message crosses international borders.”

You’re very popular with gay men. Why do you think that is?

“I am popular with everyone who is brave enough to be unique because I am not part of any establishment. Gay men are not like their fathers and their mothers had other plans for them; most of us have relied on our parents as our role models and we pattern our lives after theirs. My parents are spinning in their graves, I assure you. The last thing they ever dreamed I would be is a comedian and a cabaret performer who defies the traditional stereotype of both a nice Jewish girl and an older woman. Gay men have chosen to create their own personal life styles and so have I. That is why we understand each other. I relate just as well to a lesbian audience. I speak to all people brave enough to hew their own path in life. I always say ‘go for it; It will make you human.’

“It is a scary thing to defy a pattern you have seen all your life; people see that I have done that and am flourishing. That inspires them to try to be themselves… and that is what it is all about isn’t it?”

Any thoughts of retirement and settling down with a gentleman?

“I take one day at a time. It would be lovely to share this gorgeous life of mine with someone but the truth is, I doubt anyone could keep up with me and I must be very intimidating to men, especially those my age who were brought up with the stupid idea that they are supposed to protect a little woman. I do not need protection.

“The truth is, I am a romantic. I love bubble baths and moonlight; I wish on stars and like to hold hands. I believe in love. It would be very nice of course to have someone to dance with and have a few candlelit suppers; someone to go to theatre or share a quiet evening together by the fire… but I have been on my own since I was twenty-five. That is a very ingrained habit to break.

“I do not believe in retirement. That to me is giving up on life. I will die on my way to a gig.”

“My worst experience was about 8 years ago doing my strip tease to a group of 21 year old male college graduates who had other things on their minds than seeing an old woman romp around in front of them waving tassels and feathers at them. The silence was so loud, it deafened me and the disapproval was smothering.

“My best experience had to be the two weeks at Soho Theatre this March. Every audience was welcoming, approving and into what I was doing. It was an unforgettable experience. I felt like a real star.”

If you could assemble any cast, alive or dead, to join you in a comedy TV show, who would appear? 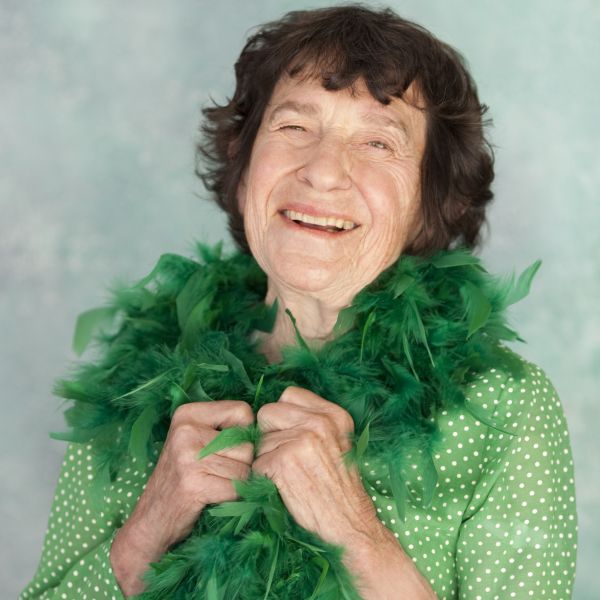