Christy White-Spunner and Mark Jones are Sisters. They appear together in a new Edinburgh show, White Noise. We fired a Q&A over to Christy.

Hi Christy, tell me about your show.

Our debut Edinburgh Festival Fringe show is called Sisters: White Noise, which is a metaphor. We live stream the entire thing to audiences around the world to speed up the process of becoming famous comedians. It also has an original score by Avril Lavigne.

The dust roads, the thronging sun, tiny little girls in blue checkered pinafores selling dolls and wares along the roads. Either that or the two star review we got from Fringe Biscuit that time.

In terms of comedy we are inspired by The Pin, Sheeps, Tim Key. What’s also quite cute about us is that Mark finds me really inspiring and I also find myself very inspiring.

One night during our work in progress run last year we had a gang in the front row who were absolutely drunk. They weren’t being mean or anything but they KEPT getting involved and throwing us off. Anyway, about a week later they turned up again. We gave them a nod and said something like ‘Back again’? and they looked at us like we were mad. It soon became clear they had absolutely no recollection of the first time. Much better behaved second time around though.

It’s our debut year, so the show in its current state been reviewed yet. I’M SURE THEY’LL BE NICE THOUGH….RIGHT?!

Fucking boring, am I right?!

So You’ve Been Publicly Shamed by John Ronson, which has inspired one of our sketches this year. Mark can’t, and won’t read.

What you wearing right now?

One entire game of Monopoly. 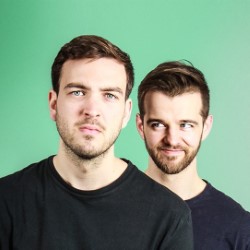