After a year away, character comic Anna Morris returns to the Edinburgh Fringe with Would Like to Thank. The show is filled with confessions, dark twists, competition, tension, jeopardy, songs and fearless interaction at an awards ceremony that is falling part. Martin Walker finds out more.

“It’s a Woman of the Year Awards, which goes disastrously wrong. I play the host, and all four contestants, who each make a presentation and use every trick in the book to win. You, the audience, vote for the winner, and therefore there are four different endings to pick from. I won’t know how it ends, until you vote.

“There are a lot of twists and turns, and the pressure of the night makes some people spill secrets they shouldn’t and go to extreme lengths to win.

“The contestants include a Mumtreprenuer who thinks you can have it all, a domestic goddess with a dark secret, a single women’s activist from The Bitchelors campaign group, and a war correspondent with a dangerous attraction to Dictators and a gun: who will you vote for?”

How is being a character comic different from being a regular stand-up?

“You have to be quite selective about gigs, as if you turn up at a regular stand-up night dressed as a bride – for example – and start doing your wedding speech, people look like you like you’re a bit weird. So you end up mostly just doing character and sketch nights, and leaving the house with a very odd bag of props. I once got my luggage checked before flying to the Glasgow fringe and in my suitcase was plastic gun, a doll’s head, two wigs and a gas mask. Just a regular props list for me… Stand ups just need a mic. I’m jealous.”

Do you have a favourite character?

“I think my favourite character will always be Georgina the Bride, who has her own web series on YouTube: Georgina’s Wedding Blogs. I have an affection for her as she was my first ever attempt at solo material. She’s an absolute monster. She’s engaged and obsessed with telling you about her wedding planning. She’s auditioning her own Bridesmaids at the moment I think, and you have to apply online if you want to bring a plus one. She’s very thorough… “

“I’m sad about BBC3 as so many of my favourite comedy programmes have been on there – like Chris Lilley’s stuff -my favourite character comic – and Nighty Night first started on there. It’s been a great platform for new comedy and I hope something equally as good comes along.

“I think it’s good they’ve realised that there isn’t a balance of male/female contributors to panel shows but I think they should be careful not to pick people to be ‘token women’ as it’s so patronising. That sometimes happens at gigs. You become aware you’ve been asked because you have a vagina. This isn’t a helpful answer is it? But I managed to say vagina. Twice now. So that’s good.”

“Chris Lilley, Victoria Wood, Julia Davies, and Amy Schumer. Can I be in it? Or is that cheating? Or is that too many women?” 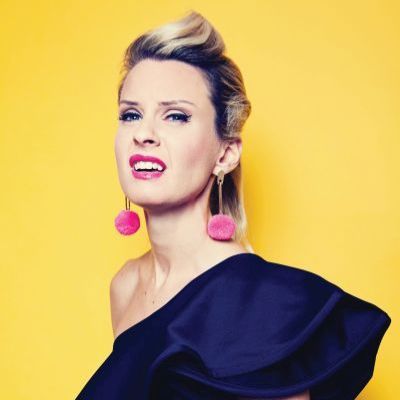