Hatty Ashdown is an actor, writer, presenter and stand-up comedian. She’s the co- writer of up coming Big Talk sitcom Give Out Girls, to be broadcast later this year. She also loves MC’ing and recently had a successful run co-hosting talent show Star Search at the notorious Bethnal Green Working Men’s Club. Martin Walker talks to the all-rounder about her debut solo Edinburgh Fringe offering.

“Hatty Ashdown: Hurry Up Hatty is my debut comedy hour, so it’s a bunch of my best stuff about how I was a mistake and had a very old fashioned upbringing. I was sent off into the world with a head full of strange ideas and thus silly things just seem to happen to me. While writing the show I found out that I might be genetically lazy, a condition I have to fight every day of my life. Together, I think we can get through this, embrace it or defeat it. You can hear the lengths I go to for something sweet, finding work, loosing work and how to survive the unglamorous bottom-end of show business that is… promotions work.”

“I just love the free fringe. To me it’s what the fringe is all about and the laughing horse have always been good to me. The venues are so well run and Alex is always there with his helpful emails! I’m sure one day I’ll go disgustingly corporate and be a sell out in a large paying room- so until then catch me while I’m free!”

“I don’t really know… I was a struggling actor and did this short stand up course for a laugh as a character act called Olive Ulay – a beautician – crikey she was awful – but my friend said you should just use those jokes but be you! So I blame my friends”

“It was very frightening, but exciting, I had not been going very long, but a moment where I thought wow there’s over 500 people here and they are laughing at me! was performing at the Udderbelly on the south bank as part of Josie Long and Friends alongside her and people like Robin Ince and Pappys. I think I’ve wiped most bad moments from my memory ‘cos that’s the only way to get through it, move on!”

“Well first of all I’d turn it into a chat show with me presenting, with guests like Jessica Fosterkew, Lou Sanders, Cariad Lloyd and Stuart Laws because they are original, funny and not pricks.” 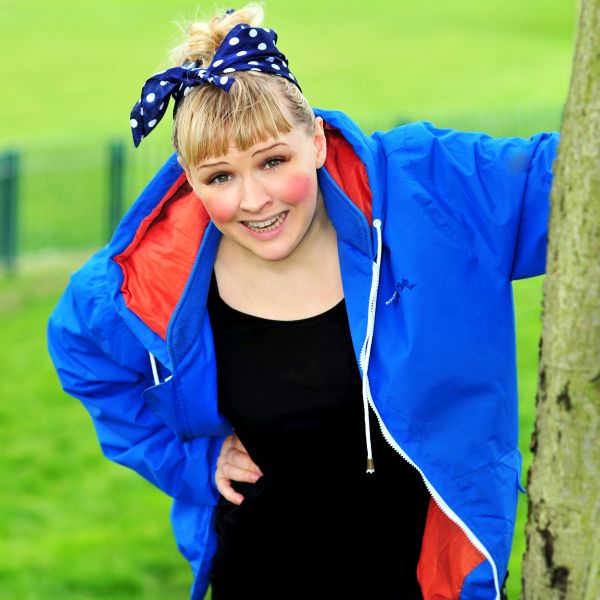