Amber Glancy: Wine Show is a solo clown performance I started devising in 2019, though when I look back on my life it’s an idea that dates back to early childhood. My show is about a wine tasting lady, and while I wasn’t thinking about creating a clown show at the age of 6, I was accompanying my parents to wine tastings every weekend in Santa Barbara at an early age. You could say I had an early exposure to California wine culture. WINE SHOW is at heart a comedy about pursuing your dreams in the face of grief. Sounds funny, huh? But honestly it’s fun to play into the pretension of a character like a repressed, sophisticated vintner who is going through an emotional hardship. It’s cathartic to go all-out into a human emotion like grief and bring to light universal human behaviours which are, in truth, funny. Without negating the importance of suffering, being able to laugh at our responses to sorrow helps to loosen its power over us. And pouring wine messily is extremely fun.

I was drawn to Edinburgh Fringe by the sheer volume of shows, international talent, and sense of comradely among performers. I’ve had friends who’ve gone to Ed Fringe in the past, and coming from Los Angeles, they’ve said there’s nothing like it. Due to the expansive and competitive nature of the entertainment industry, Hollywood/Los Angeles doesn’t have a cohesive Fringe/theatre scene, and it takes an extra effort to maintain a sense of community in comedy. I am beyond excited about going to see shows in Edinburgh, meeting new people and becoming a stronger performer by consistently honing material in front of a diverse audience I otherwise wouldn’t have access to. I’m also looking forward to exploring the city and travelling somewhere new with rich history, and that’s so GREEN. California is in a drought and anytime I go somewhere with vibrant green my eyes are delighted. Hubba hubba.

I am a fan of Sharon Horgan. She is so sharp and deals with complex/sensitive issues like mental health, accidental pregancy and sexual identity in a head-on, not-so-delicate but warm approach and is not afraid to portray messy characters. In a similar vein I admire Phoebe Waller Bridge. Live performance wise I’ve been watching Natalie Palamides perform for years and love her ability to be free on stage and play lovable and sometimes brash characters. She has an impressive ability to ‘wink’ at the audience in a way that communicates, “we’re all in on the joke here.”

Are there other shows you wish to check out at the Fringe?

What’s your go-to form of comfort when you’re in an unfamiliar place or pushing yourself to grow in a new way?

Eating a warm meal. I’m a big soup girl, and it doesn’t really matter the weather. I’ll eat hot soup with a chicken broth base when it’s hot out, I’m sorry! Soup is so soothing. Or sauce, so really any form of pasta. Bolognese ragu is best though. Exercise also makes me feel very much myself because of, well, endorphins. So I’ll be bringing my yoga towel and jogging shoes to Edinburgh for days when I need a mental break and to get into my body. 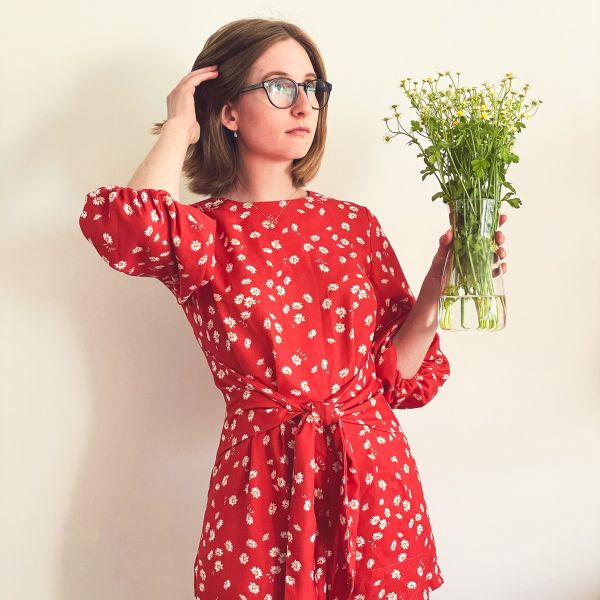