You’re all on detention at Britain’s worst school, taunt the nervous supply teacher, bunk off PE and get caught smoking behind the bike sheds. We take you back to school where you will meet all the unusual teachers at this very progressive and archaic institution.

Our first gig as the Establishment came from a germ of an idea we had, to go on stage in bowler hats and say ‘I know where I’m going’ and from there we just improvised. Surprisingly it went went well and now we can’t stop.

We have a few games we play if we have time, but to be honest we are just panicking, and trying to find props we’ve lost.

Best review, hard to say, we had a lovely one from Kate Kopstick last year. Worst review, theres a few bad ones out there, can’t think of a specific one. I’m probably in denial.

I think feedback is important and useful if its constructive.

I don’t think politicians, or the authorities should be deciding what is funny or not. I haven’t seen this video, but comedy material taken out of context is often misunderstood.

I don’t think so. Comedy is hard, I think often when it is good it exists on the brink of what is and what isn’t acceptable socially, so its easy to cross the line.

I fell asleep on the Piccadilly line and ended up a Cockfosters. Never again.

We have a show we regularly do on a canal boat in London called the Butty, this is possible one the most fun shows we do, maximum capacity about 25 people. 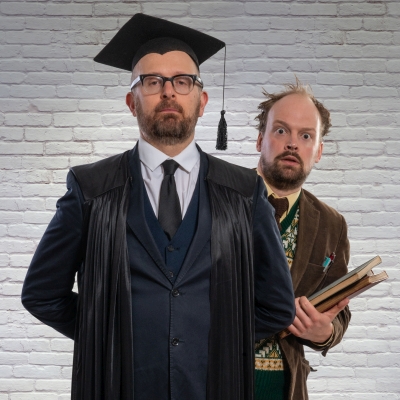