Dante’s History of the Banished is a comedy show about exile. Historical characters are reimagined in a solo debut from Charlie V. Martin. We fired a Q&A over to the enigmatic Charlie.

Hi Charlie. Tell me about Dante’s History of the Banished.

I play famous characters from history and literature who have been banished. The idea is that they’re all still out there existing and Dante, the Italian poet, is introducing them to you as he travels. My Dante is a super enthusiastic old Italian man who just wants to find a new home. Napoleon takes the audience’s questions – from “should I quit my job” to “should I shave my back” – and gives real tough love advice. Eve is now a stand-up and wants you to take down the patriarchy as well as be her whisky drinking buddy, and King Lear attempts to perform all of King Lear in under 10 minutes. There’s improv, stand-up, puppets and plenty of interaction but ultimately, it asks what it is to not have somewhere to call home.

I’m from Edinburgh so on the one hand I think of this as a joyful time for exploration and creativity but then I also get mad when tourists walk on the road.

My grandma recently passed away at age 96. Not only did her quirks and Edinburgh brogue inspire many an improv character, her and my granddad (who would’ve been 103 now) always saw the benefits of the arts and seeing “the young folk” from different cultures collaborating. They loved the Festival and their enthusiasm for it reminds me that we’re lucky to live the way we do.

My favourite memory is of the first sketch show I did with Blind Mirth where we did a full-on Beauty and the Beast medley and I got to play all the tap dancing cutlery. That show was also the first time I saw others performing my sketches and I’ll never forget how great that felt.

An architect/town planner or maybe a physio or speech therapist, or an etymologist? I’m not qualified to do any of those by the way.

What do you enjoy doing other than writing and performing comedy?

Dancing and particularly ballet has been a big part of my life since I started at age 4. I like going in for a two-hour class knowing that this is what I’ll be focusing on and I can’t be worrying about anything else because as soon as you do you fall over! That actually makes it sound really stressful… but I like it!

I’ve always wanted to write a sitcom about 18th century Venetian nuns – stay with me! Apparently, some convents were almost like fronts for feminist sororities and the nuns were actually really fed up with Casanova thinking he could ravish them. I’ve studied this period a lot and I’m sure it could be like Fleabag meets Blackadder. I’m thinking Susan Wokoma, Helen Monks, Mawaan Rizwan… ooh, and Sharon Horgan?! 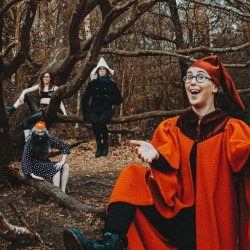