These two bad ass dudes walked on water, overcame death, and gave up everything to teach peace to the masses. One of them beat the bankers senseless with a whip, and died by crucifixion; and the other sat under a tree and died from a dodgy mushroom. Martin Walker talks to Aidan Killian about his Edinburgh Festival fringe offering Jesus Versus Buddha.

“When I was touring in Asia I learned a bit about the Buddha and it reminded me of some of the stuff Jesus was on about so I put on my inspector gadget hat and investigated to see if they were connected: Maybe Jesus was the reincarnation of Buddha? I mean 3 random wise men turned up at his birth which has Dalai Lama written all over it! I read that during the lost years of Jesus, (12-30) he went to India and Tibet, learned the Buddha’s teaching of Love and Compassion, came back all excited telling everyone to stop throwing rocks at each other but then they got annoyed with him and ultimately killed him… Maybe it was nothing to do with the new message he was speaking and it was the annoying new Indian accent. Who know? The show will look into who Jesus and Buddha really were, what their message was and what the religions are not telling us about them.

“One of the things left out of the Bible, which leaves out loads of juicy stuff from the other 46 non-included gospels was when Jesus was young he sometimes misused his powers: One day a kid bumped into him. Did Jesus push him back like most kids would do or did he turn the other cheek? Nope, he killed him instantly and then when the dead kid’s parents complained, he didn’t apologise, rather he removed their sight. That will teach them for interfering in his instant death move! One thing not often talked about with Buddha is that he entered a miracle completion, a miracle-off if you will, or an older version of X-Factor… and instantly won. My show is not an hour of one man attacking religion. That would be too easy, rather I will go into the act bits we don’t know and truly investigate who these men were and what they had to offer through the art of comedy… So it does not bore the pants off us. And I guarantee all go to heaven… even if you don’t go to the show”.

Is religion a force for good in the world?

“This is a tricky question and I don’t think I am in a position to say what is good or bad, however I will say that religion has a long history of being involved in torture, genocides, war, slavery and every inhumane thing that can be imagined. When I look at my granny who goes to mass every day I see that she is definitely acting as a force for good in the world. Thus I say each individual is responsible for their own actions and if they use religion as an excuse to not think, well fuck them! Eh I mean… forgive them! I see religion like a sharp axe… you can use to chop firewood to make dinner for your family or you can smash your mum in the head with it.”

“I was an investment banker in Tokyo and I simply wanted to have better presentation skills. Comedians are the best public speakers in the world so I signed up to an open mic, I did ok and fell in love with it, quit my job and here I am now getting paid in laughs rather than shit loads of cash… YAY!”

Tell us about the Comedy Crash Course.

“This started to teach business people presentation skills through the art of comedy, but has grown and now all sorts of people do the weekend. Many have no interest in being comedians, rather they do it as the bungy jump of self-improvement courses. Many see it as an extremely positive live changing weekend. I offer 100% money back and over 400 people have done it and no one has taken that offer, which I am proud to say. Basically everyone can be funny, it is just learning how to express yourself in that way and once people feel safe, their creativity can shine.” 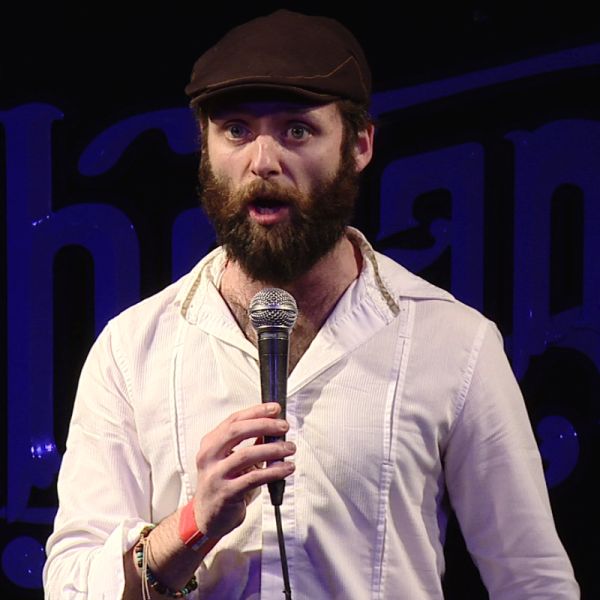