After touring the Australian festival circuit for three years, Nicole Henriksen presents her debut solo show at the Edinburgh Fringe, Rainbow Rabbits with Rabies. Martin Walker learns more about the up and coming multimedia stand-up comedian.

“My show, Rainbow Rabbits with Rabies is a high-energy, new-wave amalgamation of deluded characters, worrying songs, artistic multimedia interludes, and witty stand up. It’s a step up from my two previous shows, with a song about gyrating labia, an on-stage death, balancing out the stand-up material about my boys, One Direction.”

“I heard about Laughing Horse at the Adelaide Fringe in 2013. It seemed like an amazing concept, with a real focus on performers being able to bring their work to the biggest arts festival in the world, with the help, support, and knowledge of Laughing Horse.”

“I’d been intrigued by comedy since I can remember, but I never thought it was for me. A few years ago, I started watching more comedy, and when I watched The Mighty Boosh live shows, I knew I wanted to create something like that on stage. Something layered, with rich characters as well as stand up. Something that utilised the stage with multimedia and combined theatre and musical elements to create a show that the audience would be captivated by.”

“My best experience would be two shows I performed in Newcastle (NSW, Australia), as part of the Newcastle CRACK Theatre Festival. It was a full house both times, with people sitting in the aisels and standing up at the back, and every single person in the audience came along with me, and was so ready and willing to be part of the show, which is something I feed off and lifts both myself as a performer, and the show. It made for an electric atmosphere and two amazing shows.

“The worst is probably a show I performed this year at the Adelaide Fringe. Everyone but about three people were not engaging with the show at all. People were on their phones, talking to each other, talking to me, flicking through their programmes, and staring off into space when all else failed. I was contemplating stopping the show, but I persevered, though I don’t know if that served any real purpose, to be fair. It was definitely the kind of gig that afterwards you just want to curl up into a ball and listen to Ben Folds in your dressing gown while the saliva from the ice cream you’re eating rolls down your chin and is absorbed by the dressing gown. You know, like a classy lady.”

“Well first and foremost I’d have myself, obviously. Then probably a couple of my “inspirations”, so The Mighty Boosh and Jimmy Carr. Along with some of my contemporaries from the circuit I think are amazing, like Demi Lardner, Rhys Nicholson, and James McCaan. Is that too many?” 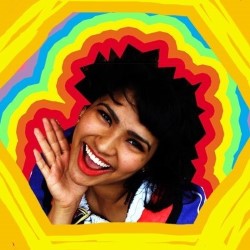