Andrew O’Neill is an award-winning comedian off the telly and radio, who happens to dabble in the occult. We dared to ask him about his free Edinburgh show, Andrew O’Neill’s Black Magick Fun Hour.

Hi Andrew. What happens when you drop acid and invoke Mercury, the trickster god of the spoken word?

You go mental, experience a butt-load of frankly unrealistic sounding coincidences and you end up writing a much better show than the one you had to abandon cos SOME PRICK IN NEW ZEALAND WROTE EXACTLY THE SAME SHOW.

Robert-Louis Stephenson (or is it SteVenson?), the potato shop, the smell of hops, actual hard work for a month.

Literally, Mercury/Hermes/Thoth. Because they embody the whole essence of stand-up comedy. Alan Moore, cos he’s a genius and a nice chap, every brand-new open-mic stand-up because their enthusiasm for comedy has yet be be destroyed. We older comics feed on their energy like leeches. THAT IS WHERE IT GOES!

Every performance is a gift. A lovely flower. A beautiful song, sung by an angel. A child’s smile crossed with the dappled light from a new dawn… Apart from that time I was MCing at Reading festival and the crowd were there for the down-to-earth working-class observational comedy of Kevin Bridges but he hadn’t made his flight and so instead I had to put on the brilliant but ‘challenging’ anti-comedy of Neil Hamburger. He lasted five minutes before being bottled off and then I had to go back on and fill the space. It was a challenge.

I was once described as a “Public school fake”. My mum has that on her wall. “We did alright if they think you went to a posh school, didn’t we?”

Have you just written a book and is it for sale online and in most bookshops and also after your shows?

Yes I have! Yes it is! It’s called A History Of Heavy Metal and I’m doing five FREE performances of the show that inspired it across the Fringe at various times. Details on my site.

It would be me as the companion of a time-travelling alien played by Jodie Whittaker. I’d have the whole series written by Alan Moore, Grant Morrison and Steve Aylett. David Thewlis would play our main enemy ‘The Master’ and I would call it Doctor Who. 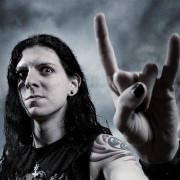