Apparently, the Galway Tribune said that “Love & Brain Damage is so tragically funny it’s almost artistic.” The show isn’t listed in the Fringe brochure, or anywhere else. It may not even exist… But Michael seems very nice and we just had to find out more.

Hi Michael, tell me about your show, Love & Brian Damage.

It’s my story, my life, my golden turd so to speak.

I suffered severe Brain damage when I was 5 as a result of being hit by a car. I died and woke from a coma six weeks later. My injuries include a paralysed right side, fractured pelvis, ruptured spline & permanent damage to my frontal lobes. I had to relearn how to walk & talk all over again, I guess I was lucky I was only 5 & didn’t lose that much. My accident obviously affected my behaviour & relationships with people the show will explore those relationships. Tragic I know but I promise it’s funny.

Edinburgh is my home, I could the festival every single day of my life without it wouldn’t matter if no one turned up to the show id still be happy. My favourite part of the festival is Flyering I just love talking to people, joking & getting to know my audience, I’m very good at it too. I’ve got an awful lot of energy, I don’t really know where it comes from but it just keeps going. What else an I supposed to do with it? Work 9-5 pushing computer keys like a lunatic? It would be long before my boss got a keyboard across the face!… serious tho. The festival is complete freedom for me

I wouldn’t describe this as a best/worst experience in terms of being on stage, it’s more my best memory of support.

It was my first festival in 2011 I was having a good gig, I was performing with a good friend Gary Lynch (fantastic comedian & like most great comics under appreciated by the “scene”) he noticed that I wasn’t enjoying myself & gave me a kick up the hole by encouraging me to find the fun in what I’m doing. Since then I’ve stopped trying to be the comedian I wanted to be and started being myself.

“So tragically funny it’s almost artistic.” I guess in the da Vinci of comedy, I’ll take that..

I read Gerry Conlon’s book about the Guilford four, I was in prison at the time (long story, but part of my show) yeah, that wasn’t a good idea…

Q: Michael, who would win a fight between Batman & Superman?

A: Stop talking to yourself you silly Bastard.

I don’t have a TV licence, Do I need one for Netflix?.. 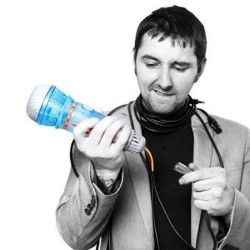