An avid television enthusiast, David Morgan’s love of the small screen led to him writing for HeatWorld and creating a popular rundown of the Eurovision Song Contest that was part of the BBC’s Online Coverage. Martin Walker asks about his latest Fringe offering.

“Hello, it’s about the fact that although they’re part of our everyday lives we aren’t yet trained in how to deal with the new situations brought up by social media and how I think I might be turning into a Social Tool… with jokes. Also a little bit about my first love, television. It’ll be funny, promise.”

“I love television, everything from Scandi Drama to Extreme Couponing. My current favourite shows are Ex on the Beach, sexy lumps of meat in the sun thinking they’re on a dating show but forced to face their awful pasts without the articulation to do so, The Good Wife, amazing drama with fully rounded ‘shades of grey’ characters, Scandal, balls to the wall bat shit mental night time soap with excellent wardrobe, and Release the Hounds, people running away from dogs for money.”

“I love Edinburgh, it’s a ridiculously beautiful city that gets ruined by posters and dramatic types for a month every year.”

Have you been out on the Edinburgh gay scene?

“When it’s the Festival everywhere is the Edinburgh gay scene, – C Venues bar is like a training camp – out of the festival I have been to CC Blooms and The New Town Bar -Upstairs only. It’s lovely and the Edinburgh gays are hot.”

What do you think of the BBC plan to axe BBC3?

“I think it’s short sighted. We need to nurture not only the people that aspire to be on television but those that seek to make it. Some of the best documentary and drama has been on BBC3, In the Flesh season 1 was a masterpiece. We need the prestige of a broadcast channel to let young people know that they’re just as important as your Nan watching Springwatch. I just hope they continue to commission interesting and brilliant shows for the broadcast hours they do have.”

“I’d have trouble putting that together as there are so many amazing acts, it’d be longer than the Eurovision Song Contest. I think I’d make it a fully homo show as I don’t really get to gig with other gay people so, the amazing Mae Martin, she’s excellent, the dangerously thin but brilliantly funny Rhys Nicholson, the woman that makes my insides hurt from laughing Hannah Gadsby and to round it off the incomparable Paul Sinha. God that would be a fun gig, someone book that, me hosting obviously.” 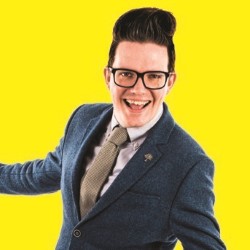