A little while ago I was listening to a podcast about Buffy the Vampire Slayer (because I can’t help but be who I am) and they were discussing quite how much death is depicted in the show. It’s a lot; after all it does have the word ‘slayer’ in the title. They said that there must be ‘countless’ deaths shown over the 144 episodes, and I thought ‘I bet they’re not countless; I bet I could count them.’ So I did. I (re)watched all of Buffy the Vampire Slayer and made a spreadsheet detailing every single death depicted, reported, referenced or implied (you’ve got to have them all). Yes, I did have a very productive lockdown.

My show is the result of this mammoth project. Because once I had all that data, I had to do some statistical analysis. How many vampires does Buffy slay in total? And how many of those does she stake with a pool cue? Who is the most harmless Scooby, and whose murders do we let slide? Is it possible to find the most average death in Sunnydale? Crucially, is Buffy the Vampire Slayer the best vampire slayer in Buffy the Vampire Slayer?

Expect pie charts, line graphs, tree maps and flow charts. And jokes, of course. There are jokes. Though I feel the biggest joke of all is that I have actually done this – I can (and will) show you the spreadsheet.

It is a comedy show about death, Buffy and statistical analysis.

I am so excited to finally be taking my own show to the Fringe. I have been fascinated by it ever since I was a teenage comedy nerd, learning all about the origins of Monty Python, Fry and Laurie, and Billy Connolly’s pub crawls on Rose Street. As I grew up I became a comedy podcast addict, and heard all about the exciting things that were happening up there in the present.

I first went up as a punter and I can remember feeling viscerally excited as my train pulled in to Waverley; I was actually shaking with anticipation. Within half an hour of getting off the train I was in a yurt at the Alternative Comedy Memorial Society watching Steve Pretty play pentatonic scales on a soprano cornet until the condom he’d pulled over the bell inflated and burst. I was in heaven, and I was hooked. I was very excited, then, that the following year I got to return to compete in So You Think You’re Funny?

I’m thrilled to be bringing my debut hour show to the Fringe this year; I can’t wait to be up there, to be amongst my peers and heroes, seeing the amazing work that so many people are producing – I’ve never felt more part of the comedy community than when I’m in Edinburgh in August. I’m also so excited for people to see my show; I’m really proud of it and I’ve had really great feedback from my previews, from comics, reviewers and audience members alike. One of the great things about the Fringe format is giving performers the opportunity to present longer-form shows, to really take the time and space to examine one or two topics in depth, and it’s an opportunity I’m relishing.

However I can’t answer this question fully without mentioning some of the drawbacks of the Fringe, and the way performers have been and continue to be let down. The lack of an app at this year’s Fringe was a real disappointment, and the way it was (or rather wasn’t) communicated to the acts was atrocious. As an audience member I found the app invaluable for finding shows, both for seeing what was nearby that I may not have considered, and for searching for shows I was already looking for – the search functionality on the Edfringe website on mobile is clunky and unintuitive. Similarly, I’m aware of what a privilege it is for me to be able to bring a show to the Fringe from a financial perspective; I’ve been saving for years (literally) to be able to afford to bring a show, and it’s still going to be tight. It doesn’t have to be this way, and I really hope the Fringe Society can do more in the future to help curb the rampant landlordism leeching cash out of the pockets of performers and creating huge barriers against all but the wealthiest and most privileged from performing at the biggest arts festival in the world.

Don’t worry, my show has a much more uplifting finale.

My two favourite reactions to watching other comics perform are ‘I could never do that’ and ‘I wish I had done that’. In the first camp are the really silly, inventive acts who have minds that just work so differently from mine: people like Bec Hill and John Luke Roberts, who always manage to surprise and delight; the best piece of MCing I’ve ever seen was watching Joz Norris encourage an audience to clap along to a song and then deliberately clapping on different beats and chastising the crowd for not being in time with him, I nearly fell off my chair laughing; and the best live experience I’ve ever had was watching Alex Horne’s Monsieur Butterfly show at the Fringe – I left so elated, and I still think of the incredible visual gag with the Jenga set.

In the second group are people I can try and emulate or learn from: Nish Kumar’s amazing ability to construct a well-reasoned argument point by point, with brilliant jokes at every stage; Stewart Lee’s self-referential deconstruction of the form; the nature of my show will naturally invite comparisons to the likes of Dave Gorman and Thom Tuck, which to my mind can only be a good thing; and finally Steve Cross, whose routine in which he forensically works out the exact date on which the world ended in The Hitchiker’s Guide to the Galaxy made me cry with laughter and in anger at how perfect it was, and how much I wish I had written it.

Finally, there is a third category of acts who just never fail to leave me feeling happy and hopeful: Josie Long is a delight and her work encapsulates joy and optimism; Mae Martin is so effortlessly brilliant and hilarious, and I have never met anyone who’s seen them perform live and not instantly fallen in love with them; and Alice Fraser deserves so much – her trilogy of stand-up specials are some of the best I’ve ever heard, her sterling work on the incredibly imaginative daily podcast in 2020 The Last Post, and her never-ending delightful silliness combined with really inciteful satire on The Bugle and The Gargle are a wonder to behold.

It won’t surprise you to hear that I’m planning to see Alice Fraser’s show Chronos. I’m also really excited to see Grace Petrie’s first stand-up show, Butch Ado About Nothing  – I’ve been a huge fan of her music for a long time as she straddles many of my greatest loves: comedy, folk music and left-wing politics. As well as writing funny lyrics, when she plays live between the songs she’s the funniest musician I’ve ever seen – it feels so natural that she’s stepping into the world of stand-up.

I’ve seen a preview of Chelsea Birkby’s show No More Mr Nice Chelsea, and it’s brilliant. Chelsea is so funny and deals with serious topics so deftly and hilariously. Alex Farrow is fantastic and his Philosophy Machines will be right up my street. I’ve long been a fan of Heidi Regan who really knows how to wring everything out of an idea and has an eye for structure that I aspire to. If it’s the data and graphs drawing you to my show, I can recommend Matt Hobs: Follow The Science.

There is also another Buffy-themed show going to this year’s Fringe: Brendan Murphy is presenting Buffy: ReVamped which is an annoyingly good title. I think we’re taking very different approaches so they will be very different shows, and I’m looking forward to seeing what he does. Our slots don’t clash so perhaps Buffy fans visiting the Fringe could make it a double bill.

Ben, do I have to have seen Buffy to enjoy your show?

Not at all! I have absolutely approached writing this show for anyone to enjoy, whether they have never seen an episode, whether they watched it in the 90s but can’t really remember much, or whether they’re a die-hard Bufficionado and plan to wear their Buffy T-shirt to the show. Several people have seen previews without any prior Buffy knowledge and confirmed that it is perfectly accessible and still funny, so no need to get the wiggins (there will be some spoilers). Scoobies are obviously very welcome. 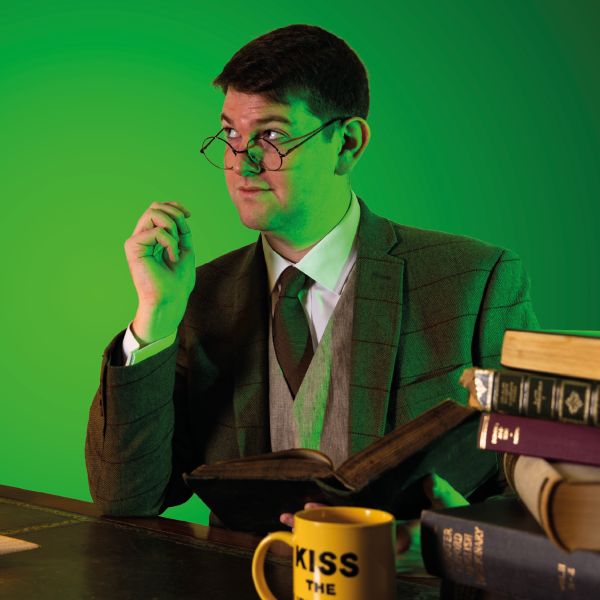