Bethany Black describes herself as a ‘Goth, lesbian, transsexual, vegan, recovering alcoholic, and drug addict, sceptic, rationalist, atheist, comedian, chameleon, and caricature’. Long-time fan, Martin Walker, asks how all these labels inform her comedy and who her influences are.

“I think they [these labels] can’t help but inform what I do, but they’re not all of what I am. That there’s so many of these little pigeon holes is in itself a joke. Everyone’s looking for a Unique Selling Point, and mostly it’s bullshit, we’re all people and we all have a life that is filled with experiences that have made us who we are. Mine are a little different than most, which enables me to look at stuff from an outsider’s perspective; other people tend to weight them far more than I do.”

I first came across Beth performing at the Edinburgh Fringe in 2009 performing the brilliant and very personal show, ‘Love and a Colt 45’. I wonder if she plans to return.

“Currently I’m not planning on taking anything to Edinburgh this year, I broke my leg 18 months ago and had a series of unfortunate things that happened following that so I’m currently just gigging around the country and paying my bills, but based on what happened over the last few years.”

What does she think about the BBC edict to ban all male panel shows? Are were they right to axe BBC3?

“I think that there should be more women on panel shows, but I think they handled it wrong this way. It looks like they’re trying to get good points for them whilst actually making it more difficult. Women will be seen as being tokenistic rather than there on merit and it’ll put more pressure on in a way that’s unlikely to help.

“As for BBC3 I think that they were wrong to axe it, I think that it’s been a good proving ground for TV comedies that have been excellent. There’s been a lot of rubbish too, but it’s been a place for experimentation that’s what is needed – art is good when you have a chance to fail at it.”

Human rights are improving in the UK for many people, especially in the gay community at the moment . I wonder if trans people’s rights also improving.

“Trans rights are improving, helped in part by things like twitter and facebook where finally trans people have a voice and are able to contact each other and say “This isn’t acceptable any more”. So many TV comedies and film comedies, whenever they have a trans character, the joke is always the trans character, that “they’re really a man!” Either that or they are jokes based on their appearance, which is horribly offensive, especially when so many trans people face harassment and abuse on a daily basis. There’s still this feeling in society that everyone agrees that it’s okay to treat trans people, and trans women in particular, as objects for hate or ridicule. Moreover people feel that when they do, no one’s going to stop them. But people are standing up and saying that this is not appropriate any more, saying that using words like “Tranny” is as offensive and as rooted in bigotry and hatred as the N word.”

If Beth were curating a stand-up show for television, who would be her guests?

“I would have Wil Hodgson who is just one of my favourite story tellers and who the first time I saw him just made me go “Wow! I want to be him!”, Michael J Dolan who makes me more jealous of his writing than any other comedian. Alex Boardman who I think gets dismissed as “just a northern comic” but I genuinely think he’s the UK’s answer to Louis C.K. I don’t know of a single comedian who absolutely nails the disappointed man style like he does. Jen Brister I’m also a massive fan of and think she deserves a much bigger audience, and finally Hannah Gadsby who never fails to make me crease up with laughter, and who I also love because of the number of people who’ve confused the two of us, we don’t look alike but we’re both lesbians with short hair and I used to wear glasses and somehow that makes us the same person. I once spent an hour talking to a famous comic’s wife at the Edinburgh fringe and she introduced me to someone else as Hannah Gadsby.” 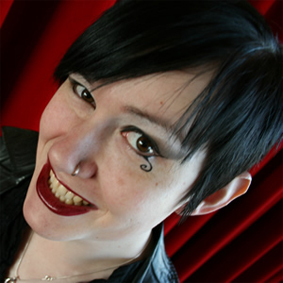