At Home is about settling down with someone and the highs and lows that come with making a commitment – in my case buying a house. That show has been to the Leicester Comedy Festival and the Soho Theatre in London’s West End. It’s a fairly straight stand up show and these things always develop as stand up material tended to have a certain shelf life. Jokes weirdly gain then lose their funny the more you do them. It may sound weird but jokes are almost like fruit they ripen and then rot over time.

So how does he make the jump from CBBC presenter to stand-up comedian?

I was actually doing stand-up first. Some TV folks saw me gigging in London when I was still at Uni in Edinburgh studying law. They got me to screen test and I got the job whilst still studying for my finals. They waited for me to graduate which ended up being a bizarre experience as I had my last ever exam on a Thursday, moved to London on Sunday and was live on TV by the Tuesday. My time at CBBC was so much fun and having started 5 years ago it’s really weird to watch my stand up audience grow with that. I regularly get 18 year olds in my gigs who watched me as a child. Odd. Very odd.

So does his dad now realise that he’s got a real job?

Haha, yeah I think he’s got his head around it now. Watching me pop up on TV once every blue moon certainly helps him justify my life choices in his own head. He’s so supportive now but I think still questions how anyone can make money doing the stupid job I do!

So what about Scottish Independence? Does Iain have a view?

I’m really confused by the whole thing at the moment. I was leaning pro at the beginning but now it feels like Alex Salmond has no real ‘plan B’. I reckon he’s about two weeks away from arguing independence by simply screaming ‘your mum’ at his opposition!

If you were curating a stand-up show for television, with fellow Scottish comedians, who would be your guests?

Lots! Scottish comedy is in such a great state at the moment. Kevin Bridges was a real influence when I first started as was Frankie Boyle and Billy Connelly. Currently I think Susan Calman is brilliant and her Radio 4 show is a great listen! I better mention Daniel Sloss as he constantly buys me drinks on nights out – also as much as I hate to admit it he smashed Conan when he appeared on that (see YouTube clip below). There are also some great guys coming through Robin Grainger, Gareth Mutch, Gareth Waugh and Richard Brown are all great and worth checking out if you live in the Bonnie Banks! 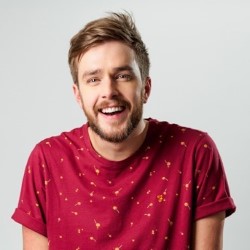