Bra Trek is about finding where we fit in life and a bra that fits – it’s “bra as metaphwoar”. We assume we grow up learning to be us and forging our identities through loving parents, wise elders and learned books, but more likely it’s from gaslighting siblings, school frenemies and sadistic teachers having a bad day.

It was 1984. I was in a clown troupe performing at the Moleworth Peace festival – a protest against nuclear missiles at the American air force base there. I’d spent the day entertaining ungrateful, anarchic and scary children. In the evening there was cabaret in a big old circus tent. After a couple of brandies, I donned my red nose, leapt on stage and said, “I’m a clown, I’ve done all the clown workshops” and everyone laughed. Probably at me rather than with me, but it all counts. And I continued in that vein with some pretentious mime called My Orgasm A Woman’s Story. it was so successful people threw paper cups at me, recyclable of course, and the rest is History.

I go a bit blank and tired beforehand and can’t imagine ever being present enough to be on stage. My main concern is that my nose doesn’t hold any horrible bogie surprises that are going to start dangling out, so I do lots of blowing, and jig around a bit like we do in the Tai Chi Class For Elders that I do on Thursdays.

Your worst review can be your best review – Three Weeks once said, “this isn’t comedy, this is a cry for help” and that looks great on a poster. Chortle sneered, “Like Josie Long’s Mum,” which looks complimentary. Critics are much more imaginative when they are slagging you off. When they like the show they waffle, and it sounds like your mum wrote it. This year one reviewer in New Zealand had only one word – “Buxom”.

I always intend to ignore them, but I find it hard. Reviewers are like exam invigilators – both are usually young and unemployed the rest of the year and enjoy a power surge for a short intense period of time.

It depends on how many stars they give me.

The world would be a better place with compulsorily good manners. Our default should be, “does this hurt or scare people? Does this make the world a better place?”

But was his prosecution an infringement of his freedom of speech? Or was it about amplifying racial hatred through social media?

What if the dog responded to the command “Invade Poland”? Would that have been less bad?

What if it was an avante garde piece comparing German nationhood to Pavlov’s dog, where people follow orders when their inner racism is legitimized by an authoritarian power. That would have been quite a good defence, actually.

To think that clever dog could have been taught to do something that won Britain’s Got Talent instead.

I can read an audience now, but in the old days I picked on a volunteer and he refused saying “My dad’s just died,” and I said, “what are you doing out then?”

I’m always thinking I’ve just had the best gig of my career! The only way is up. 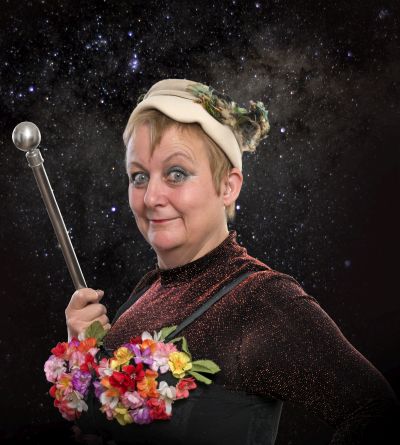