I recently bumped into my first ever boyfriend from when I was 17, and it really unsettled me, especially as I’d only popped out for a pint of milk in mid hair dye session and had a paper bag on my head trickling red gunk at the time.

It got me thinking about how we remember things about past relationships, often wrongly. – Could we have missed out on ‘the one’ by accident- and where do we even get that idea of ‘the one’?

I put it down to films- and for me it was one film, a horror film I saw when I was 8 called, SHE. X-Bond Girl Ursula Andress played the evil but beautiful immortal woman who hankered after her first boyfriend (who she had murdered in a jealous hissy fit!) and found reincarnated in an English chap 2000 years later.

I reckon she was a really bad influence! But as everyone fancied her, she got away with everything!

That film taught me that being obsessive, jealous and vengeful would make boys fancy me!

You’ve been performing stand-up comedy for over three decades now. This is your tenth solo show at the Edinburgh Fringe. How has your comedy changed over the years?

I started doing stand-up in the punk chaos of alternative comedy- you had to learn as you went along in front of merciless audiences. You had to get your jokes in fast before they got you! No one was interested in your feelings or your ‘journey’.

Nowadays both comedians and audiences are better- (and not off their heads) so there’s time to build your comedy world and explore our themes.  But Jokes are still what it’s about. Comedy is our human superpower, our weapon against the dark.

Tell me about the comedy workshops that you run.

Just recently, I’ve taught Beginners Stand up at London’s City Academy and at the Tring Festival, both with amazing showcases at the end. Can you teach people to be funny?  Yes! It’s about forging a connection between comedian and audience, making your world view shareable with people who don’t know you! One of the Tring Festival participants has already been offered work on the back of her showcase performance after only 8 sessions!

Is it true that you got stuck at the New Zealand Fringe during the covid lockdown? What happened?

-I had been going to New Zealand annually for four years, as they adore visiting performers and treat us brilliantly! I arrived in March 2020 with an early form of this show, did two performances in Wellington and then a World Pandemic was announced!  Level 4 Lockdown happened, and I had to find a ‘bunker’, luckily offered by a kind woman I had met once, in the annexe of her ranch in Henderson Valley, near the Black Sands. After a week I managed to get one of the last flights out of New Zealand but had to go via Canada. Air crew were in full panic mode, throwing bottles of water at us like we were Typhoid Marys, no veggie food and worse, NO GIN!!  Any Brit comics left behind immediately became stars, as the only remaining ‘international comedians’. 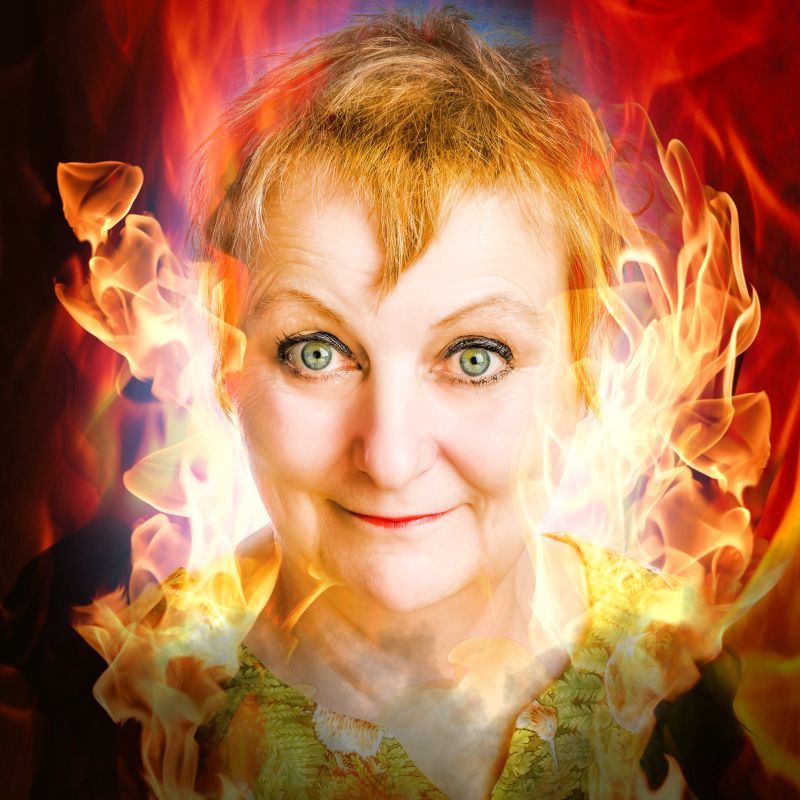